A Hive of Activity 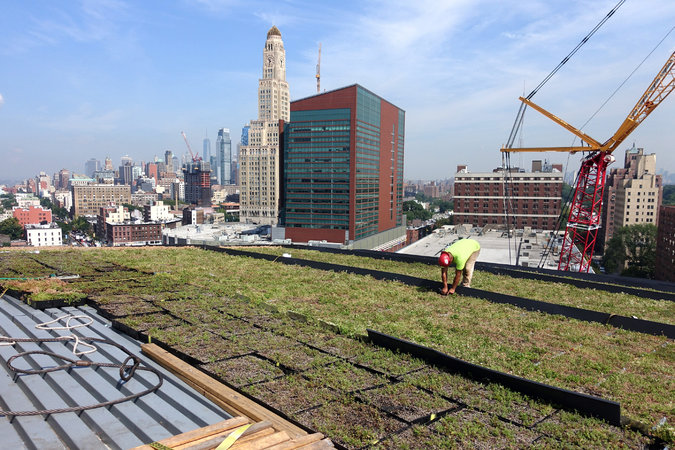 Call Live Bee Removal to help you identify and remove unwanted bees, don’t kill them, save Bees! Call us 951-476-8495

A Hive of Activity Atop the Barclays Center

“We have a bee,” Ashley Cotton said, in a we-have-liftoff voice.

The mission was to see the latest fast-food stop for the pollen-and-wax crowd, in three acres of green space added last month in Brooklyn. A few hundred feet above the Nets’ basketball court, on a roof-above-the-roof now under construction over part of the Barclays Center, the three new acres hold thousands of seductive sedum plants — seductive to bees, anyway.

For a few days last month, the green space was a four-star destination for hundreds, maybe thousands, of bees that suddenly showed up to forage on the sedum. Just as suddenly, they stopped appearing, at least in such numbers.

So by the time Ms. Cotton, a vice president of Forest City Ratner Companies, which built the Barclays Center, got there a few days later, the one bee was something to see. She aimed her phone and snapped a photograph.

“The bees were an unexpected, amazing side effect” of the roof project, Ms. Cotton said.
Grace Notes A bimonthly column that captures the essence of the people and places of New York.

“Bees have been on my radar,” she said, “because there’s been so much reporting that I’ve read about declining bee populations, but I had no sense that we would be a home for these bees. We were hearing from the construction workers. They were telling us, ‘You wouldn’t believe it, but there are all these bees up here.’” 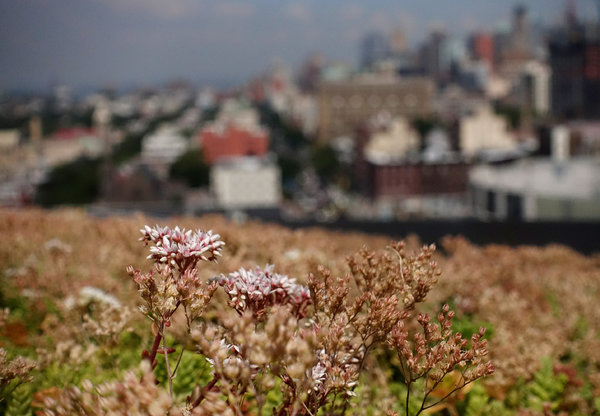 The garden was briefly a destination for hundreds of bees that suddenly showed up to forage. Credit Chang W. Lee/The New York Times

Vincent DiMaio, a senior superintendent with Hunt Construction Group, witnessed that as he worked. “Every day, the magnitude of the bees got more and more and more,” he said. “You would look down here and see things hovering. I thought, Brooklyn is going to start mass-producing honey from this.”

The flowering season for sedum began almost as soon as the plants were delivered last month. Some of them flowered even before they were placed in the grid system that was specially built to hold them. The word went out among the bees of Brooklyn, though “word” is probably the wrong word. Bees do not talk. They do a wacky, wiggly dance back at the hive to tell one another where the next really great meal is to be found.

They did not wait for Mr. DiMaio’s crew to play waiter and set out all of the not-very-seductive plastic trays containing the sedum plants. The trays look like garden-shop issue, 2 by 2 feet. There were a lot to put in place — 34,000 trays in all — and they were filled with a dozen different types of sedum.

The bees, bobbing and weaving through Brooklyn air space at something like 12 miles per hour, plunged right in. The pickings were lush. On the Barclays Center roof, there were no marauding bears to fend off.

“I’m no bee expert, but they clearly go for the flowering plants,” Ms. Cotton said. “I never thought of it as a floral blooming roof. People think it’s a grass roof, which isn’t totally accurate, but I never thought it actually bloomed.”

The sedum was imported from Connecticut in a huge container that looked like a trash-hauling bin. A crane lifted it to the roof, and the workers began carrying them out.

The containers were lighter when they arrived than they are now, suggesting that a Brooklyn diet is about water weight. “When they’re saturated, they’re 90 to 100 pounds,” said Robert P. Sanna, the executive vice president and director of construction and design development for Forest City Ratner. “Some of them shipped dry. That’s only 60 or 70 pounds.”

There is no sprinkler system. “We’re not going to maintain this with a lawn mower and a sprinkler system,” he said. “In the spring, it’s going to be green. In the winter, it will gray up a little.”

Mr. Sanna said the plants looked simple and low-tech, but the engineering was complicated. 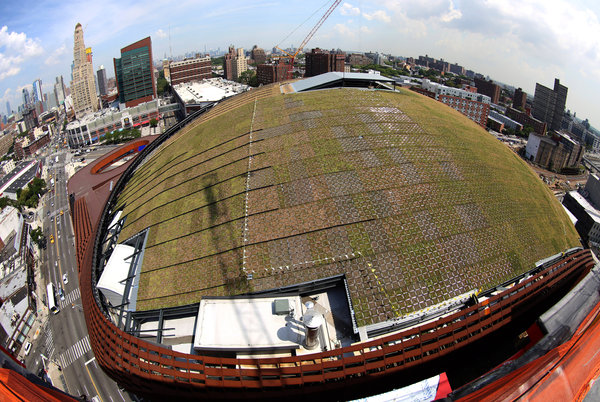 A view of the sedum garden on top of the Barclays Center, photographed with a fisheye lens. Credit Chang W. Lee/The New York Times

“We had to create an entire system, a deck, to hold it,” Mr. Sanna said.

“We had to take the load and transfer it to the columns,” Mr. Sanna said. “But this is an arena. There are no columns in the middle, so we had to build trusses to transfer the load to the sides.”

There is also a 10-foot-high gap — “interstitial space,” Mr. Sanna called it — between the old roof and the new deck. That lets rainwater percolate through on its way to drain pipes leading to giant holding tanks, which Nets fans never knew were down there somewhere.

So where did the Barclays Center bees go after they stopped foraging there?

Andrew Coté of the New York City Beekeepers Association said they probably did not move on to form the the swarm that descended on a bicycle in Manhattan last week. Hundreds of bees squeezed onto the handlebars and the head tube of the unoccupied bike, chained to a street sign at 56th Street and Seventh Avenue.

Nor were the Barclays Center bees the artsy ones a few blocks away at the Museum of Modern Art. A sculpture there by the French artist Pierre Huyghe of a reclining nude figure has a head that is a living beehive — a colony of live, bustling bees.

Brooklyn bees do not get into Manhattan much, he said. “If they can avoid it, bees won’t cross great bodies of water” like the East River between Manhattan and Brooklyn, he said.

And if bees from Manhattan made the trip to Brooklyn, they would not go back. Or so he said.

“You get a guy from Topeka, Kansas, or Walla Walla, Washington, stick him in Williamsburg for a month, ask him where he’s from, he’ll say Brooklyn,” Mr. Coté said. “It’s the same with bees.”