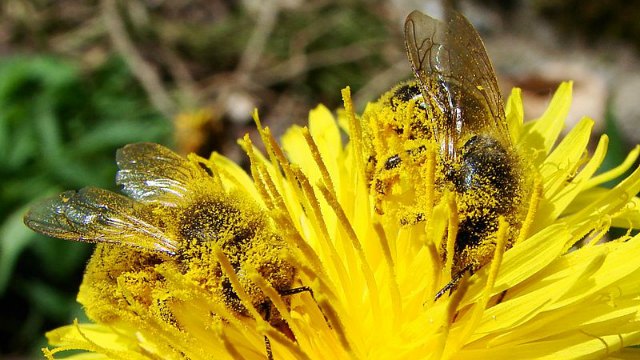 For years, scientists have been amassing evidence that neonicotinoid insecticides, meant to keep insect pests off agricultural crops, are also harming essential pollinators, bees. But laboratory studies are limited and real-world simulations have been lacking. Two large field studies published today (June 29) in Science largely confirm that neonicotinoids are bad for bees.

A three-country European field study led by Richard Pywell, a lead scientist at the Centre for Ecology and Hydrology in the U.K., reports that neonicotinoid exposure generally reduces the honey bee’s ability to survive the winter and reduces the reproductive success of wild bees. A Canadian study, led by Amro Zayed at Toronto’s York University, confirms that bees in the field are exposed to doses of neonicotinoids similar to those scientists have been using in the lab.

“It’s the biggest field trial anyone’s yet done on the impacts of normal farming use of neonicotinoids on bees,” University of Sussex bee biologist Dave Goulson, who reviewed the Pywell paper for Science but was not involved in the work, says of the European study. “It basically confirms what many previous studies have found, which is that normal farming use of these chemicals does indeed appear to harm wild bees and probably also honey bees.”

Although the results from the Pywell study largely showed a negative effect of neonicotinoids on bees, neonicotinoid exposure did not affect overwintering success for honey bees in Germany, one of three countries where the researchers did experiments.

“You don’t always get a one-to-one correlation between a negative stimulus and a negative result,” says Purdue University entomologist Christian Krupke, who also was not involved in the work. “It’s one of the reasons that this debate has gone on so long. . . . You can imagine that if that [German] study had come out on its own, we’d be having a very different conversation from the fact that it’s imbedded with this other work.”

Indeed, previous studies on bees’ response to the insecticides have been mixed. For instance, a previous field study in Sweden found that neonicotinoids harmed two species of wild bees but not honey bees. Critics have also had concerns that prior experiments didn’t use “field realistic” exposures.

In their giant field experiment, Pywell and his team planted three different plots of oilseed rape—one treated with the neonicotinoid clothianidin, one treated with another neonicotinoid, thiamethoxam, and an untreated control—at multiple sites in the U.K., Germany, and Hungary. To best assess the insecticides, the researchers applied them at concentrations typical of real-world farming.

In the spring, when the crop flowered, they placed colonies of honey bees (Apis mellifera) and two species of wild bees, bumblebees (Bombus terrestris) and red mason bees (Osmia bicornis), in the fields and left them there throughout the flowering period. Afterward, they removed the bees from the experimental plots. At this point, in the summer, they dissected the bumblebee and solitary bee nests to analyze the bees’ reproductive fitness. They moved all the honey bees to another landscape with non-crop floral resources and continued to monitor their health through the winter and into the following calendar year.

The researchers were interested in how neonicotinoid exposure affects honey bees’ abilities to survive the winter, as that is key to colony health, they write in their report. In Hungary, the clothianidin-exposed honey bee colonies had 24 percent fewer workers than control colonies after the winter. In the U.K., colony mortality was so high, with numerous colonies totally wiped out, including many of the controls, that they could not stastistically analyze it. In Germany, on the other hand, neonicotinoid exposure did not seem to affect honeybees’ ability to survive the winter.

The researchers believe the difference may relate to diet. “In Hungary and the U.K., where we found this negative effect of neonicotinoids, the pollen load analysis suggested that oilseed rape or canola, as you call it, makes up a far greater proportion of the honeybee’s diet . . . compared to Germany,” Pywell says. “We think that that actually influences the amount of exposure that bees are getting to neonicotinoids,” he adds. Additionally, the U.K. and Hungary have more bee diseases than Germany, he says.

Pywell notes that he and his colleagues found neonicotinoids that they hadn’t used in the experiment, such as imidacloprid, in bumblebee nests. They believe it had lingered in the environment from a previous agricultural application. There were also pesticides in the nests of bees at control sites, points out Maj Rundlöf, a bee biologist from the University of Lund in Sweden and the University of California, Davis, which, she says, could potentially explain the variability in overwintering success that the researchers observed. “If you find pesticide residues at control sites, then you would expect an even smaller difference between treated and control sites,” she says

Zayed and his team, in Canada, were interested in determining the levels of neonicotinoids that bees are exposed to in the field. They placed honey bee colonies either close to or far from neonicotinoid-treated corn and tested the bees, pollen, and nectar for more than 200 pesticides throughout the beekeeping season. “The first big surprise we found was that we were detecting low levels of neonicotinoids for a very long period of time,” Zayed tells The Scientist. “We’re talking about three to four months of the season. That’s pretty much most of the active bee season in temperate North America. So although the amount of pesticides, neonicotinoids, we found was low . . . they persisted in the environment for a long time.”

The researchers found that the bees collected neonicotinoid-contaminated pollen not from nearby treated crops but from wildflowers that tend to live near crops, suggesting that the neonicotinoids, which are water soluble, are getting into the water supply and thereby into untreated plants, Zayed says. The field data indicate that previous lab studies were exposing bees to “field-realistic” levels of pesticides, Zayed says.

Once the researchers determined the levels of pesticides to which honey bees are exposed in the field, they experimentally exposed the bees to artificial pollen containing similar levels of clothianidin, the most common pesticide they detected during their study, and examined the effects on bee health. Bees fed the neonicotinoid-laced pollen died younger than unexposed controls and also exhibited less “hygienic behavior”—that is, removing diseased or dead bees from the hive before infections can spread. Colonies fed the pesticide-laced pollen were also less likely than control colonies to have an egg-laying queen.

“I think it’s reached a point now where no reasonable person would deny that these chemicals are impacting on bees one way or another,” Goulson says. “Obviously, scientists would like to do more research, but at some point, you have to make decisions, and it seems to me that a pretty obvious decision needs making.” The use of neonicotinoids on flowering plants has been illegal in the E.U. since 2013, and European parliament is debating an even broader neonicotinoid ban, against all uses outside greenhouses.