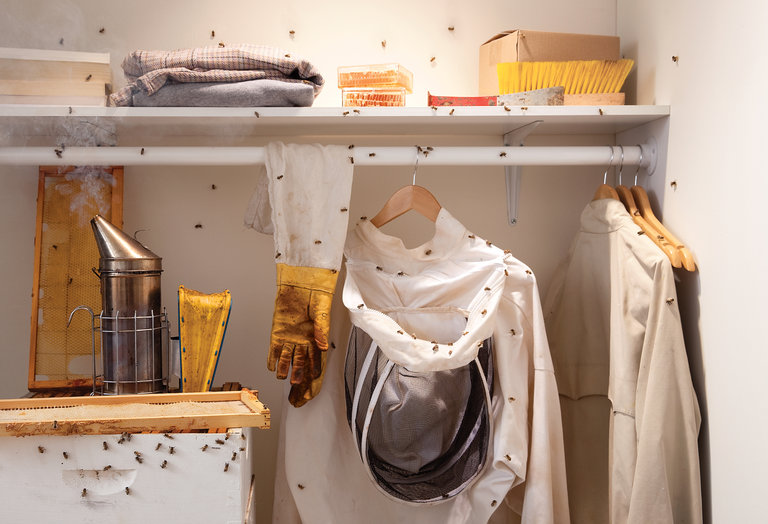 Letter of Recommendation: The Beekeeper Joke

The funniest joke in the world, as I insist it is, proceeds like many others: two guys meeting on the street; the presentation of a problem; the suggestion of a remedy; and then, of course, the unex­pected consequence. Most jokes like this depend on some sort of misunderstanding. ‘‘Madam, your son has got his foot stuck in my daughter’s commode!’’ — like that. But this one’s not like that. The standard model is just confusion. You can see where things went wrong; just back it up and you’re O.K. The world’s the same again. That’s part of the fun.

But this joke belongs to a different — I want to say higher — order, wherein the terms of the gag undergo a fundamental transformation, so you can’t back up, can’t get back where you were. It’s a little like Groucho Marx’s declaration that he wouldn’t care to belong to any club that would accept him as a member. The inconsistencies of the heart are expressed so succinctly that laughter fades into reflection.

Most punch lines, though absurd, are comprehensible: implausible as some exotic algebra but, like algebra, internally consistent. I can tell most of these jokes just fine. You hit the punch line, and you’re done. You get a laugh — no sound of crickets. Somehow, though, the funniest joke in the world (as I insist it is) escapes my efforts. It seems to redirect me out into an open field at night. I hear the crickets chirping well before the end. And then I’m out there in the dark.

My friend Brian Lidji tells it beautifully, though, and has for 40 years. And almost always at my pleading: Come on, Brian, tell the joke. He rolls his eyes, but I can see that he’s going to do it, even though it’s not among his favorites. Those belong to an indecent and possibly endless series involving an amorous Jack Russell named Tag. Once he gets going on them, they tend to keep on coming, as if each variation on the theme of mindless canine fornication were a separate link in a critical chain of thought. I can imagine Brian arguing some complex point of corporate law — he always makes those best-in-the-profession lists in the magazines — with similar precision and attention to the dirty practicalities. His gift is to tell this joke as if just taking a break from the more compelling argument.

‘‘So this guy is walking along Fifth Avenue in New York City one day when he sees an old friend walking toward him. He looks awful. This old friend is really dragging. Hasn’t shaved or combed his hair. He looks like crap. ‘Hey, Charlie,’ our guy says, ‘what’s wrong? You look like crap.’ ’’

I think perhaps the reason Brian doesn’t care so much for the joke is that it undercuts, subsumes, subverts the other jokes. It cuts across the lovely, intricate structure of them all and leaves us lost and giddy in the emptiness.

‘‘ ‘Oh, I don’t know,’ Charlie says. ‘Nothing seems worth getting up for anymore. It all seems meaningless. Like, what’s the point? Maybe I’m depressed, I guess, or something.’ ‘Gee, that’s terrible. So, are you doing anything for it?’ ‘Nah, can’t see the use.’ ‘You gotta do something, Charlie.’ ’’

Brian holds his hand up here like a traffic cop, then makes as if he’s pulling a card from his wallet, writing a number on it.

‘‘ ‘Hey, go see this guy. Just do it for me. This guy’s a brilliant doctor. Just go see him.’ He hands the card to Charlie. Charlie shakes his head, but takes it, shuffling off.’’

Now Brian starts to lean into it, picking up the pace. He knows this joke is like a funnel — all converging only to empty out again.

Brian makes this dismissive face as he utters the punch line, the one I can never manage to deliver properly. Brian is instinctive with this stuff. He doesn’t care about the crickets or the philosophical difficulties. He just holds his hands out, leans across without missing a beat and says: ‘‘Hey, [expletive] ’em. It’s only a hobby.’’

You don’t pause or emphasize it. You just let it come: absurd, without that little wink absurdity likes to give you. Here is passion neither foiled nor mocked, but rendered arbitrary. ‘‘No, no, no, I keep it closed.’’ I hear that line and I just lose it every time. I flash back to Charlie striding down the street in perfect, inexplicable fulfillment. God, that’s it. That’s what we do.