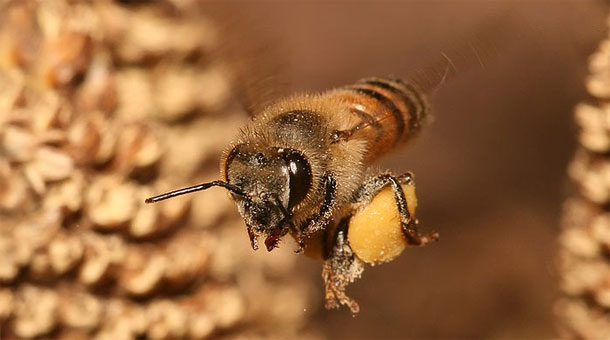 Bee-ware – bees use warning buzz to refute the waggle dance

Bees can communicate with each other using the famous “waggle dance”. With special figure-of-eight gyrations, they can accurately tell other hive-mates about the location of nectar sources. Karl von Frisch translated the waggle dance decades ago but it’s just a small part of bee communication. As well as signals that tell their sisters where to find food, bees have a stop signal that silences dancers who are advertising dangerous locations.

The signal is a brief vibration at a frequency of 380 Hz (roughly middle G), that lasts just 150 milliseconds. It’s not delivered very gracefully. Occasionally, the signalling bee will use a honeycomb to carry her good vibrations, but more often than not, she’ll climb on top of another bee first or use a friendly headbutt. The signal is made when bees have just travelled back from a food source where they were attacked by rivals or ambush predators. And they always aim their buzzes at waggle dancers. The meaning is clear; it says, “Don’t go there.”

These signals were identified decades ago, but scientists originally interpreted them as a begging call, intended to cadge some food of another worker.  It seems like a strange conclusion when you consider that the signals never actually prompt workers to exchange food. Their true nature became clearer when scientists showed that playing them through speakers could stop dancers from waggling.

James Nieh from the University of California, San Diego have uncovered the meaning of these cautionary buzzes. Nieh watched workers as they arrived at crowded nectar sources. Occasionally, the crowds would get too much and the bees experienced pollinator-rage, biting and wrestling with each other. In these cases, the attacker’s behaviour didn’t change but the victim produced around 43 times more stop signals back at the hive and sent fewer of her fellow workers to the site of the attack.

Any sort of physical assault was enough to change their behaviour, from the attacks of other bees to a short pinch from a curious scientist. But the more dangerous the assault, the more extreme the behaviour. Fights with other bees can be off-putting but they almost never result in loss of life. On the other hand, encounters with a predator like a mantis or a crab spider are far graver perils. When Nieh simulated the strikes of these hunters by pinching worker bees with tweezers, he boosted the number of warning vibrations by 88 times.

In contrast, the smell of pheromones from a bee’s sting gland suggests that other workers have been forced to defend themselves but doesn’t actually involve physical contact. Accordingly, it increased the number of stop signals by just 14 times.

Surprisingly, we know very little about these sorts of off-putting signals among social insects. One of the only other examples is the Pharaoh’s ant, which uses a repellent pheromone to discourage other workers from heading down fruitless paths.