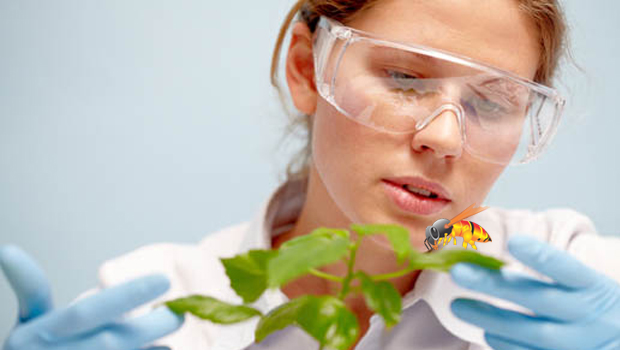 Bees can use sophisticated signals to warn their nestmates about the level of danger from predators attacking foragers or the nest, according to a new study.

Biologists at UC San Diego and in China found that an Asian species of honey bee can produce different types of vibrational “stop signals” when attacked by giant Asian hornets.

These signals have different effects depending upon type of danger and the context. A bee delivers a stop signal by giving another bee a brief, vibrational pulse, usually through a head-butt.

“Surprisingly, this signal encodes the level of danger in its vibrational frequency, its pitch, and the danger context through the duration of each pulse,” said James Nieh, a professor of biology at UC San Diego who headed the research team., which was also led by Ken Tan, a professor at Xishuangbanna Tropical Botanical Garden, Chinese Academy of Science.

The scientists report their discovery, which they say is the most sophisticated form of alarm signaling found in a social insect, in a paper published this week in the open-access journal PLOS Biology.

Six years ago, Nieh discovered that foragers of the European honey bee, Apis mellifera, when attacked at a food source, will return to the nest and deliver stop signals to nestmates recruiting for the dangerous food source. These signals were known to inhibit recruitment, the famous waggle dance of the honey bee, but researchers did not know what triggered stop signals.

“Stop signals are usually delivered by a sender butting her head into a recipient. Understanding that these signals can be triggered by danger and reduce recruitment for dangerous food therefore made sense,” explained Nieh.

Nieh next wanted to find out if other honey bee species also used stop signals. He and his collaborators at the Chinese Academy of Science and Eastern Bee Research Institute in Yunnan Province conducted their experiments at Yunnan Agricultural University using the Asian honey bee, Apis cerana, which occurs throughout southern and eastern Asia, from India to China and Japan.

The scientists said this honey bee species is an excellent model for studying the effects of predator threats because A. cerana is attacked by multiple species of giant hornets, which pose a threat according to hornet body size. They studied the world’s largest hornet, the “yak-killer” Vespa mandarinia and a smaller, but still formidable hornet, Vespa velutina. Both hornet species are natural enemies of A. cerana.

These hornets attack foraging bees and bee nests, and the scientists therefore set up their experiments to see if bees would produce stop signals in both situations.

“We hypothesized that bigger predators would pose a bigger threat and would change stop signaling, perhaps by producing more signals when attacked by a large predator,” Nieh said. “However, we were very surprised to find that these Asian bees not only produced more stop signals, they also produced different kinds of stop signals.”

In addition, guard bees and returning foragers attacked at the nest entrance produced longer duration stop signals to warn nestmates about the imminent danger outside.

According to Nieh, “this is the first demonstration of such sophisticated inhibitory signaling or alarm signaling in an insect.” Previously, such referential alarm signals had only been reported in vertebrates like birds and primates.