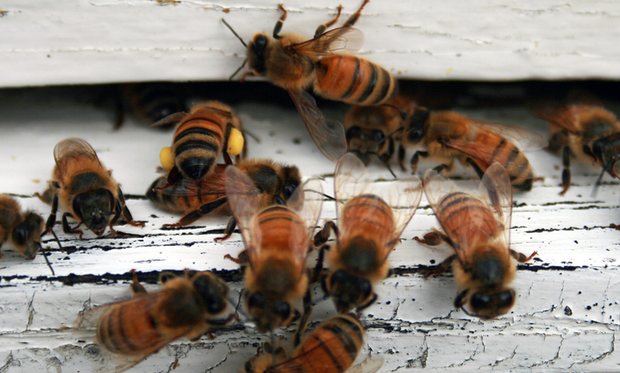 We guarantee you same day live bee Removal with the best customer service, we safely remove bees and transfer them to a safe nest or colony, we kill and remove wasps and yellow Jackets for a free quote please call us 951-476-8495.  Please enjoy our new article: By: Elle Hunt

Of all Australia’s venomous animals, bees and wasps pose the biggest threat to public health, causing more than twice the number of admissions to hospital as snake bites and the same number of deaths. The first national analysis of 13 years’ data on bites and stings from venomous creatures has found that just over one-third (33%) of almost 42,000 admissions were caused by bees and wasps, compared with 30% by spiders and 15% by snakes.

Though snake bites caused 27 deaths between 2000 and 2013, nearly twice as many per hospital admission as other venomous creatures, researchers found fatalities from snakes were rare given that there are 140 species of land snakes in Australia. People were more likely to die from an encounter with a horse or dog, said Dr Ronelle Welton, a public health expert at the University of Melbourne’s Australian venom unit, who led the study.

Stings from bees and wasps caused 12,351 admissions and 27 fatalities. There were three deaths caused by jellyfish, a further three by ticks and two by ants. A man reportedly died from a redback spider bite in April last year – the first such fatality in more than 30 years – but it fell outside the study period.  Welton said Australia was known internationally as “the epicentre of all things venomous”, but had a surprising lack of data about related injuries and fatalities, which meant national guidelines for prevention and treatment were inadequate.

She said she was surprised to find that more than half the fatalities occurred at home, and two-thirds (64%) in major cities and inner-regional areas where healthcare was readily accessible. Bites and stings were much more likely to occur between April and October, and dangers varied by state and territory. Anaphylaxis from bee stings was common in South Australia, while in Queensland there were more snake bites. No fatalities were recorded in Tasmania but there were instances of anaphylaxis caused by jumper ants.

Men aged between 30 and 35 were the most likely to be bitten or stung. More than half (34) of the deaths were the result of an allergic reaction that caused anaphylactic shock, which researchers pointed to as evidence of a widespread and under-reported problem of allergies in Australia. Three-quarters of snake bite victims died in hospital, compared with only 44% of those who died from an allergic reaction to an insect sting. Welton suggested that could be because bees were perceived to be more “innocuous”.

“Most people don’t really fear them in the same way they fear snakes,” she said. “Without having a previous history of allergy, you might get bitten and, although nothing happens the first time, you’ve still developed an allergic sensitivity.

“We need to understand why people are dying from bee-sting anaphylaxis at home”. Prof Daniel Hoyer, of the University of Melbourne’s department of pharmacology and therapeutics, said the “number one surprise” of the research was that there were so many deaths caused by insect bites. The incidence of potentially life-threatening allergies in Australia was “enormous” and a much bigger problem than many people perceived, he said, pointing to the fatalities caused by “Melbourne’s thunderstorm asthma” in November. More than 8,500 people were taken to hospital after the mass asthma event triggered by severe thunderstorms and at least eight died, many of whom did not know they were susceptible.