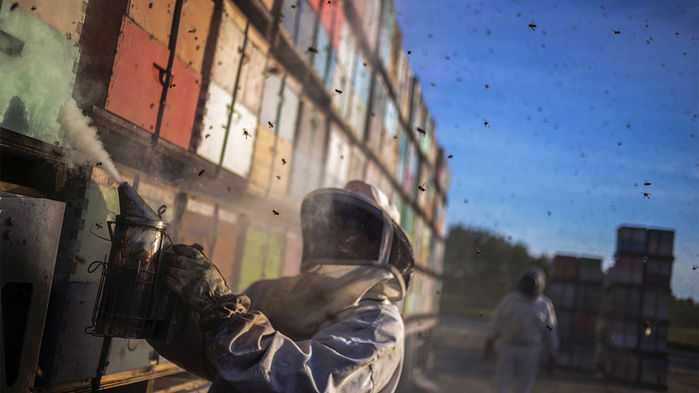 Europe’s largest field trial of controversial insecticides called neonicotinoids has delivered a split verdict on the danger they pose to bees. The £2.8 million, 2-year-long study of 33 sites in the United Kingdom, Hungary, and Germany, described this week in Science, provides the first real-world demonstration that agricultural use of these common pesticides can hurt both domesticated honey bees and wild bees. But on German farms, the honey bees did just fine, suggesting that in some situations colonies can weather the toxicity.

“We learn again: It’s complicated,” says biologist Tjeerd Blacquière of Wageningen University in the Netherlands. The mixed findings are likely to intensify ongoing debates about restricting or banning the compounds, with both sides claiming vindication. Neonicotinoids became popular as insects evolved resistance to other compounds, and they are now the world’s most widely used class of insecticides. They are commonly coated on seeds rather than sprayed on leaves, so they guard against soil pests; later, the seedlings take up the pesticide, protecting the plant from insects. But neonicotinoids also find their way into pollen and nectar, posing a threat to pollinators.

In the laboratory, low doses cause disorientation and other effects in bees. That fed suspicions that the pesticides might play a role in honey bee declines that beekeepers were reporting. As a precaution, the European Union in 2013 put a moratorium on using three neonicotinoids on oilseed rape and other flowering crops that attract bees.

Companies have argued that lab studies aren’t realistic. Field trials, meanwhile, have not found an impact on honey bees, but some have shown harm to other kinds of bees, including bumble bees and solitary mason bees. In 2014, Bayer CropScience and Syngenta asked the Centre for Ecology & Hydrology (CEH), a government-funded research organization headquartered in Wallingford, U.K., to conduct an independent field trial of two neonicotinoids: clothianidin and thiamethoxam. After receiving exemptions from national regulators, the researchers planted treated oilseed rape, then monitored nearby bees. To explore the role of farming conditions, they did the trials in three countries.

In Germany, they saw no lasting effects in honey bee colonies near the treated crops. But in Hungary, colonies near oilseed rape treated with clothianidin had, on average, 24% fewer workers the following spring. (Thiamethoxam had no effect.) U.K. trends were similar, but not statistically significant.

Richard Pywell, an ecologist at CEH, thinks the German honey bees might have fared better because the colonies were generally healthier than in the other two countries. Wildflowers growing near the German fields might also have provided extra resources that could have made the bees more resilient. “What this study might be telling us is that the bigger impact on the pollinators is not the pesticides but the larger landscape,” says Peter Campbell, head of product safety research collaborations at Syngenta in Reading, U.K. (Both Syngenta and Bayer CropScience, which helped fund the trial, encourage farmers to plant wildflowers around fields.)

Wild bees are thought to be more vulnerable than honey bees to neonicotinoids; some earlier studies showed that exposed wild bees and bumble bees have depressed reproductive potential. The CEH researchers found that similar signs of harm correlated with higher levels of the chemicals in nests. They also found that the nests contained low levels of imidacloprid, a neonicotinoid that hasn’t been used in Europe since the moratorium. That suggests neonicotinoids persist in the environment and are taken up by wildflowers, exposing bees years later—”a cause for concern,” Pywell says.

A separate study of honey bees in Canadian maize fields identified up to 4 months of chronic exposure to neonicotinoids that also appear to have persisted from prior plantings. “It’s a much longer period of exposure than anyone had thought,” says ecologist Nigel Raine of the University of Guelph in Canada.

Together, the findings help justify the current EU moratorium, believes Matthew Shardlow of the conservation organization Buglife in Peterborough, U.K. Ecologist Jeremy Kerr of the University of Ottawa, who commented on the findings, agrees. “The risks of neonicotinoids have been understated in the past and the benefits have been overstated,” he says. But Christian Maus, lead scientist for bee care at Bayer CropScience in Monheim am Rhein, Germany, says the CEH study does not heighten his concern. “We continue to be convinced that the products are safe for bees.”

Many regulators are reviewing the compounds. The U.S. Environmental Protection Agency has not restricted any approved uses, and preliminary risk assessments for clothianidin and thiamethoxam, released this year, concluded that most uses are safe for pollinators. Last November, Health Canada proposed a phaseout of imidacloprid, based on risks to aquatic insects, but has delayed a decision until next year. And in July, the European Commission’s Standing Committee on Plants, Animals, Food and Feed will consider extending its moratorium to all crops grown outside of greenhouses.