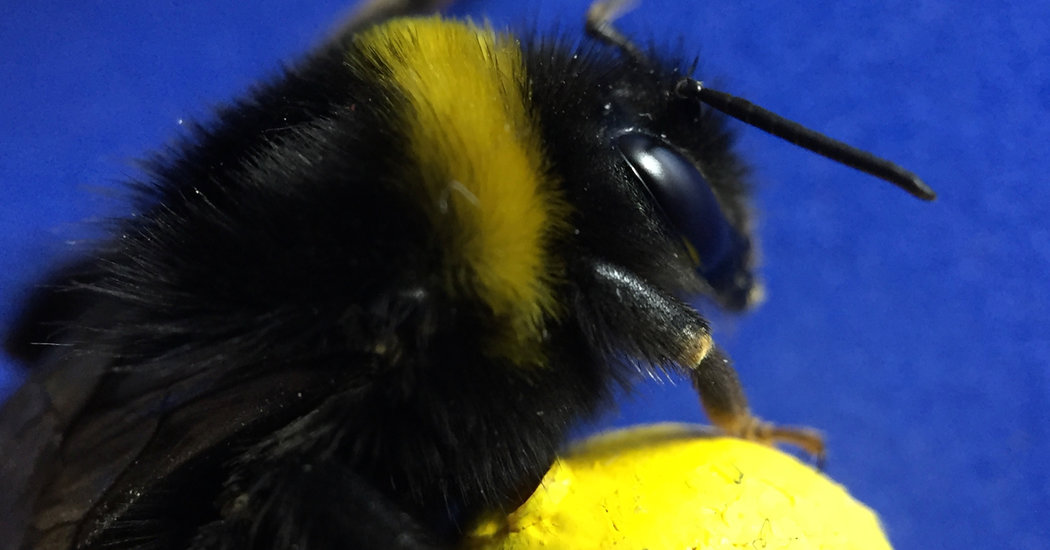 Never underestimate the power of the bee brain.

In the latest triumph for one of humanity’s favorite insects, bumblebees learned how to push a ball to the center of a platform for a sugary treat. That may not make them a threat on the chess board, but soccer or even Skee-Ball might be within their intellectual grasp — if it were scaled down in size, of course.

The new research finding is one more reason that scientists who study insects, of all sorts, would like to point out that just because a brain is small, doesn’t mean it is simple. Clint Perry, one of the bumblebee trainers at Queen Mary University of London, and a confirmed small brain partisan, said, “I’ve actually been asked if bees have brains.” In fact, a number of recent experiments have shown that “insects can solve problems, they can learn,” he said. And scientists have yet to define the limits of insects’ mental abilities.

Once, insects were thought to be little automatons, hard-wired to take certain limited actions. Now evidence is growing that the abilities, even of fruit flies, approach something that isn’t the same as human thinking, but isn’t pure hard-wired instinct either. They remember, they choose between alternative actions. They have a kind of internal map of where they are, an abstract representation in the brain of the external world.

Vivek Jayaraman, who studies navigation in fruit flies at the Janelia Research Campus of the Howard Hughes Medical Institute said recently of his opinion of what goes on in these insects’ brains, which are the size of poppy seeds: “I won’t capitalize the C yet, but it’s cognition in some form. ”David Anderson at Caltech, who studies emotionlike states in fruit flies, declines to call their brains simple, preferring a description along the lines of “more compact nervous systems.” “They are capable of doing remarkable things, ” he said.

And bees are something else altogether with nearly a million brain cells, compared with about 250,000 in the fruit fly.Honeybees have long been known to use a tail-shaking behavior called the waggle dance to tell each other where to fly for flowers with nectar, and to signal how good the nectar is. That’s like twerking not only the address of the supermarket, but a review of its produce section. Some researchers have even suggested that bees are capable of a minimal kind of awareness, an assertion that others consider speculation that cannot be proved or disproved.

The bumblebee researchers in London, in the laboratory of Lars Chittka, have tested their subjects in other ways. Recently they showed that bees could learn to pull a string for a treat of sugar water. But in that experiment, the bees might have been learning where to go and then just scrabbled around until something worked.In this experiment, which the researchers reported Thursday in the journal Science, Olli J. Loukola and Dr. Perry trained bees to do something even more removed from their natural behavior.

The task of pushing a little ball to the center of a platform was completely arbitrary. Bees don’t do anything like this in nature, where they seek out flowers for nectar and pollen. So it was a brand new behavior demanding some kind of general ability to learn.The way the bees learned was important, too. They were pre-trained to expect a treat in the center of a platform. But having to push a ball to the center to get the treat was something they hadn’t seen.

Then the researchers tried several ways of teaching the bees what to do. The bees learned best by watching a fellow bee perform the feat. After that kind of observation, 10 of 10 bees solved the problem on the first try. On later tries, they continued to improve, taking less time.That kind of imitation is social learning, say the researchers, the sort of thing more often seen in animals with much bigger brains, like monkeys.Ralph Adolphs, who studies social cognition in humans at Caltech, cautioned that the feat did not mean the insects achieved the kind of insight that humans do when they watch a task performed and understand the principles involved.

“If I show you some new complex thing to do, you can watch, understand it, and do it at 100 percent thereafter,” he said.“These bees are slowly, over multiple trials, getting somewhat better,” he said, which suggests a different mechanism.The bees also learned, although not as well, when the ball moved seemingly on its own, pulled by a hidden magnet.But, Dr. Adolphs said, “I would completely agree that the limits of bee cognition are entirely unknown.”