A Beehive That Takes the Sting Out of the Harvest

Cedar Anderson sometimes drizzles an entire jar’s worth of honey on his food. “Some people call me Pooh Bear,” he says.

To feed his habit, Mr. Anderson, 35, keeps bees in the backyard of his home in Broken Head, a village on Australia’s east coast near Byron Bay in New South Wales. He comes from a family of hobbyist beekeepers.

Ten years ago, he grew impatient with the traditional, labor-intensive methods of extracting honey. In a backyard shed, he and his father, Stuart, invented an alternative setup called Flow Hive, and this year they began to sell it.

Domesticated honeybees live in artificial hives — boxes containing wooden frames laced with honeycombs. Bees fill the combs with honey and seal them with wax. Traditionally, to check on the bees’ progress, beekeepers don protective suits, sedate the bees with smoke and remove the frames. When it’s time to harvest, they cut off the wax caps, place the frames in an extractor and filter out the wax and dead bees.

“You’re dripping with sweat. You’re lifting heavy boxes. And if you’ve got a grumpy hive, which lots of mine are, they might be stinging you through your bee suit,” Mr. Anderson said.

Another notable hazard: The bees “try to get up the legs” of the suit, he said.

To deal with all that, he and his father found another way to get to the honey, one they say is much easier. The frames in their Flow Hive contain honeycomb cells made of plastic as well as wax, and they open when the beekeeper inserts a keylike tool into the hive’s side. The honey drains through a short tube, and the hive has a clear plastic panel that lets beekeepers gauge the honey level. “You can actually watch the bees’ tongues depositing honey,” Mr. Anderson said.

The bees, he adds, remain unconcerned when beekeepers remove honey. “They don’t even notice at first,” he said.

To begin production, the Andersons needed at least $70,000. In February, their company began offering hives and honeycomb frames, without bees, for preorder on the crowdfunding site Indiegogo. A hive with six frames cost $600. 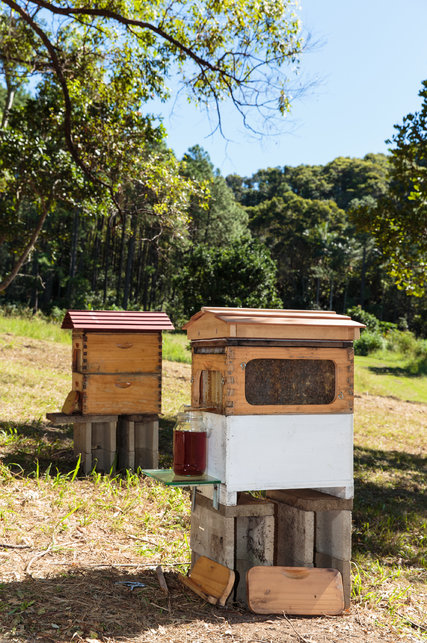 A Flow Hive with a jar of honey that was removed from it. Credit Fred McKie for The New York Times

Just seven seconds into the Indiegogo campaign, the Andersons met their $70,000 goal. Within a day, they had $2.18 million in preorders. And by the end, they had sold $12.2 million worth of hives and frames, setting a fund-raising record for an Indiegogo campaign, said Slava Rubin, Indiegogo’s chief executive.

Crowdfunding platforms have become popular ways for entrepreneurs to bypass traditional channels, but the biggest success stories have typically involved tech items, video games and Hollywood movies. Flow Hive, on the other hand, isn’t a particularly high-tech product. Instead, it’s a new way of doing a laborious, age-old task.

Seth Godin, who has written books on marketing and the spread of ideas, said in an interview that entrepreneurs who succeeded at crowdfunding usually followed one of two patterns. “They’re people who have built a tribe, and they call on that tribe to do something together,” he said. Another approach is to persuade the masses that an innovation will completely upend the status quo — that it will deliver a bit of “magic,” Mr. Godin said. The Andersons achieved this by convincing people that their product was transformative, he said.

“That got the first million dollars,” Mr. Godin said. “And from there, you get the next 11 million because people tell other people and it has credibility because it’s so big.”

“Honey is just such a mainstream concept,” he said. “It’s like, right away, everyone in the world understood it.”

An ailment known as colony collapse disorder may help explain Flow Hive’s popularity. Since 2006, beekeepers in the United States have been reporting the demise of large numbers of beehives. An annual survey of about 5,000 American beekeepers showed that 42 percent of colonies were lost in the 12-month period ending in April of this year, compared with 34 percent for the same period in 2013 and 2014. Scientists are studying whether viruses, bacteria and parasites might be harming the bees, or whether exposure to pesticides or other environmental or management techniques might be to blame.

“Bees are literally in trouble, but they’re also a symbol of the trouble we’re in because of how we’ve been treating our environment,” Stuart Anderson said.

The Andersons’ invention has not been unanimously embraced.

“I’m just concerned that it’s marketed to potential beekeepers who don’t really understand all the problems and difficulties associated with beekeeping,” says Rusty Burlew, director of the Native Bee Conservancy, which is based in Washington State, and a hobbyist who keeps a dozen hives. Among the hurdles is the need to check hives for mites and viruses at least twice a month in spring and fall — a task that would require opening the Flow Hive and rousting the bees, she said. Ms. Burlew also questions the need for an easier way to harvest honey. She concedes that beekeeping can be laborious, but she says the work comes in one short burst.

“Most beekeepers get their harvesting done during one day of the year,” Ms. Burlew says, adding that the Flow Hive, which she has not used, “solves a problem that doesn’t really exist.”

Michael Bush, author of the “Practical Beekeeper” series of books, was initially skeptical. “I thought it was impossible when I first saw a video,” he said in an email. “I actually wondered if it was a spoof or if it was real.”

When the Andersons sent him one of the hives and asked him to test it, his opinion shifted. Mr. Bush found that the device worked, but he still had some quibbles. It’s not possible to turn the spigot on and off willy-nilly, for example. You have to harvest all the honey from the hive at once, he said.

And he and Ms. Burlew both say the device is overpriced. He pointed out that it would cost him $82,000 to convert his 200 hives.

But if money isn’t a barrier, Mr. Bush sees no other compelling reason to hold back. “It’s the coolest beekeeping gadget I have ever seen,” he said.

We will beat any written estimate by 5%