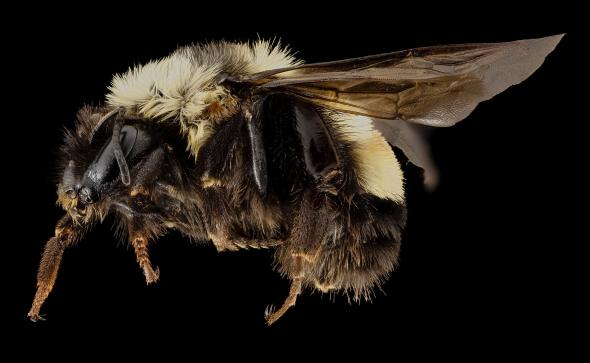 It’s official: For the first time in the United States, a bumblebee species has been declared endangered.

The rusty patched bumblebee (Bombus affinis), once a common sight, is “now balancing precariously on the brink of extinction,” according to the U.S. Fish and Wildlife Service. Once thriving in 28 states and the District of Columbia, but over the past two decades, the bee’s population has plummeted nearly 90 percent. There are more than 3,000 bee species in the United States, and about 40 belong to the genus Bombus—the bumblebees.

Advocates for the rusty patched bumblebee’s listing are abuzz with relief, but it may be the first skirmish in a grueling conflict over the fate of the Endangered Species Act under the Trump administration.

On January 11, the U.S. Fish and Wildlife Service finalized the bumblebee’s listing as an endangered species. But on January 20, the bee got stung by the Trump administration’s efforts to postpone and review Obama-era regulations that hadn’t yet taken into effect. On February 10, the U.S. Fish and Wildlife Service announced that the bumblebee’s listing would take effect on March 21, more than a month after it was originally scheduled.

The delay had been the subject of a tense legal battle: On February 14, the Natural Resources Defense Council filed suit against the U.S. Fish and Wildlife Service, arguing that the delay was illegal. In turn, industry groups including the National Cotton Council and the American Petroleum Institute had petitioned the agency to push back the listing until January 2018. The final March 21 listing renders both arguments moot.

“The Trump administration reversed course and listed the rusty patched bumblebee as an endangered species just in the nick of time. Federal protections may be the only thing standing between the bumblebee and extinction,” Rebecca Riley, senior attorney with the Natural Resources Defense Council, said in a statement.

The bumblebee isn’t the first U.S. bee to be deemed endangered: In September, seven species of Hawaiian yellow-faced bees received protection under the Endangered Species Act. (Read “For the First Time, Bees Declared Endangered in the U.S.”)

The threats facing those seven species are similar to the ones that have depleted rusty patched bumblebee populations: loss of habitat, diseases and parasites, pesticides, and climate change. This is a big deal not only for bees but for people, too—after all, bees pollinate a lot of our food. (See seven intimate pictures that reveal the beauty of bees.)

“Bumblebees are among the most important pollinators of crops such as blueberries, cranberries, and clover, and almost the only insect pollinators of tomatoes,” according to the U.S. Fish and Wildlife Service.

“The economic value of pollination services provided by native insects (mostly bees) is estimated at $3 billion per year in the United States.”

In its announcement about the rusty patched bumblebees’ endangered status, the department listed ways that individuals can help stop the bees’ decline. (See “9 Ways You Can Help Bees and Other Pollinators At Home.”)

These include planting native flowers, limiting or avoiding pesticides, and fostering natural landscapes that attract the insects.

FIRST OF MANY FIGHTS?

Foes of the law see an opportunity to weaken it under President Donald Trump, who has said the nation’s environmental rules are “out of control.”

In February, Senate Republicans held a hearing focused on “modernizing” the Endangered Species Act—promoting changes that would make it more challenging to list a new species or expedite the removal of species that are already listed. Critics of the law charge it with being ineffective, as well as a hindrance to economic development and land use.

Some observers are wary of this language. “The professed desire to ‘modernize’ the ESA has almost always been code to push forward an agenda to weaken or gut it,” Defenders of Wildlife chief Jamie Rappaport Clark told the Senate Committee on Environment and Public Works during the hearing.

Since 1973, the Endangered Species Act has empowered the federal government to protect certain species by designating them as threatened or endangered, preserving habitat and outlawing hunts. It currently protects more than 1,600 plant and animal species.

The U.S. Fish and Wildlife Service, which oversees the law’s implementation, acknowledges that the number of species so far deemed robust enough to be taken off the protected list (close to 40) is “relatively modest.”

However, the law has been nearly 100-percent successful at preventing those species from going extinct altogether, and it has allowed others, such as the gray wolf, bald eagle, and American crocodile, to thrive.