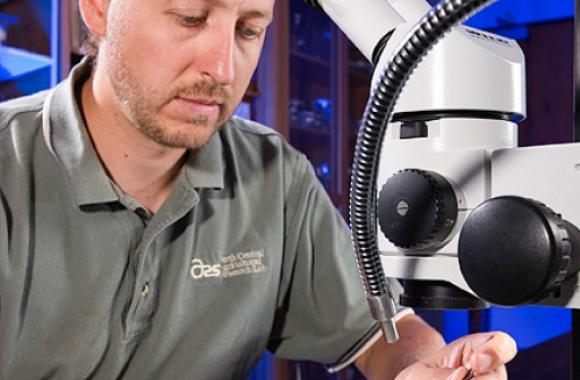 A senior scientist at the U.S. Department of Agriculture filed a whistleblower complaint on Wednesday accusing the federal agency of suppressing research findings that could call into question the use of a popular pesticide class that is a revenue powerhouse for the agrichemical industry.

Jonathan Lundgren, a senior research entomologist with the USDA’s Agriculture Research Service who has spent 11 years with the agency based in Brookings, S.D., said that retaliation and harassment from inside USDA started in April 2014, following media interviews he gave in March of that year regarding some of his research conclusions.

Lundgren’s work has included extensive examination of a class of insecticides known as neonicotinoids, or neonics, which are widely used by U.S. farmers to control pest damage to corn and other crops, helping protect production. The insecticides are sold in forms that both are sprayed on plants or coated on seeds before they are planted. They are also used on plants sold by lawns and garden retailers.

Lundgren is the first to file a formal complaint since questions arose recently about the scientific integrity of research by USDA scientists. The talk has dogged the agency for the last few years and some critics complain that scientific findings on a range of topics are suppressed if they contradict the interests of powerful corporations.

Neonicotinoids are a particularly sensitive topic because some scientists have linked them to dramatic declines in honey bee colonies, which help pollinate roughly a quarter of the food consumed annually in the United States.

The agrichemical companies that sell neonic insecticides, such as Bayer AG, BASF, Syngenta AG and others, have said other research shows that neonics are not the problem, and they have been actively lobbying lawmakers and regulators against limiting use of neonics.

Neonics are a key part of a growing global insecticide market projected at roughly $15 billion in revenues.

Lundgren and other scientists have raised questions about both the effectiveness and environmental safety of the insecticides. Research has linked “neonics” to the demise of Monarch butterflies and honey bees, in particular. Two research reports by Lundgren concluded that farmers received no yield benefit at all in using the costly neonic seed treatments.

After Lundgren spoke out about some of his findings, USDA managers blocked publication of his research, barred him from talking to the media, and disrupted operations at the laboratory he oversaw, according to the complaint filed with the federal Merit Systems Protection Board Wednesday.

The filing follows an internal complaint Lundgren lodged with USDA in September 2014.

“Dr. Lundgren’s case underscores why legal protections for government scientists are sorely needed,” said Jeff Ruch, executive director of Public Employees for Environmental Responsibility (PEER), which is providing legal services to Lundgren in his whistleblower action. “Bureaucracies under political pressure from corporate stakeholders routinely shoot the messenger, even if they are wearing a lab coat.”

PEER filed a legal petition with the USDA in March of this year, stating that the agency needed to strengthen rules to protect its scientists from internal censorship, “political suppression or alteration of studies.”

Documents supplied by PEER show that the USDA deemed Lundgren’s internal complaint to be without merit, and in August of this year the agency suspended  Lundgren without pay for two weeks. It was his second suspension in the past two years. The agency cited violations of travel procedures and failure to follow supervisory instructions as reasons for the suspension.

USDA said Lundgren’s submission of a manuscript on neonic harm to Monarch butterflies for publication in a scientific journal violated supervisory instructions. Lundgren’s supervisor told him the manuscript was “sensitive’ and would require elevated levels of approval, the documents show.

Carey Gillam is a contributing reporter based in Kansas City, Mo. She has worked as a professional journalist for more than 25 years, including 17 years covering food and agriculture for Reuters newswire.

Following is a response from The Pollinator Stewardship Council

Independence of Scientists is Integral to Quality Science

The Pollinator Stewardship Council is deeply concerned about the political influence and pressure placed upon scientists, especially U.S. Dept. of Agriculture scientists. Dr. Lundgren’s experiences, and reports of other scientists who have faced consequences or investigations, when their work called into question the health and safety of agricultural chemicals is troubling. Dr. Lundgren, and other scientists have documented clear actions that violated their scientific integrity, including:

The Whistleblower Retaliation Narrative (http://www.peer.org/news/news-releases/usda-scientist-punished-for-pollinator-research.html ) published by Public Employees for Environmental Responsibility (PEER) Oct. 28, 2015, and their previous petition (http://www.peer.org/assets/docs/usda/3_26_15_USDA_%20Rule-Making_Petition.pdf) raises grave concerns for the integrity of the nation’s agricultural science. The petition urged the agency to adopt policies to specifically prevent the “political suppression or alteration of studies and lay out clear procedures for investigating allegations and of scientific misconduct.”1 PEER found more than ten USDA scientists who have faced consequences or investigations, when their work called into question the health and safety of agricultural chemicals. The latest Narrative concerning Dr. Lundgren brings these concerns to light again. This time a well-known, and well-respected scientist is making his concerns public.

As beekeepers, we have had many opportunities to work with Dr. Jonathan Lundgren. Beekeepers have even provided our honey bee colonies for his research to better understand and improve the health of honey bees in the U.S.   We have found his research to be insightful, unbiased, and supportive of solutions to the concerns of honey bee health.

The U.S. Department of Agriculture has a responsibility to protect the health and safety of the American public, and ensure long-term viability and sustainability of the environment and our natural resources. Dr. Lundgren’s research could result in the improvement of our waters which could indirectly financially benefit the Agricultural Community overall by requiring less regulation.

All of the research the USDA conducts must maintain scientific integrity and transparency to ensure it is guiding science-based policy decisions.

The Pollinator Stewardship Council is concerned about the experience of Dr. Lundgren as a USDA scientist. We are concerned about any U.S. Department of Agriculture scientist being harassed and their work censored or suppressed, especially work related to pesticides. We again urge the USDA Inspector General’s office to conduct a thorough investigation into this and similar matters.   The USDA must maintain scientific integrity by not interfering with the valuable work of its scientists.

Scientific evidence has implicated insecticides as a leading driver of bee declines, and herbicides as a leading driver of the destruction of pollinator habitat. Beekeepers, honey producers, and the crops pollinated by managed and native pollinators rely on USDA scientists to protect the health of our food supply. Honey bees and native bees pollinate one third of the human diet. For a sustainable and affordable food supply pollinators are key to crop yields, affordable food, and diverse nutritious food.

The USDA must maintain scientific integrity, and not allow harassment, censorship or suppression of science-based findings. The Pollinator Stewardship Council will continue to support scientists who are working to provide quality, unbiased science which will benefit honey bees and native pollinators, and the health and safety of all agricultural stakeholders.

Live Bee Removal keeping the world informed about the importance of bees!