This new article is brought to you by Ross Conrad

Despite having worked six years for a commercial beekeeping outfit with over a thousand hives, and having kept bees for over twenty years, I am still constantly learning and seeing new things related to bees and beekeeping. For instance, this Summer for the first time ever, I saw a hive of bees building comb under the bottom board of their hive. I took photos of the hive since I had never seen a colony do such a thing before. I thought it was just a fluky thing, but lo-and-behold, later in the Summer I saw another hive doing the same thing. So what’s going on here? 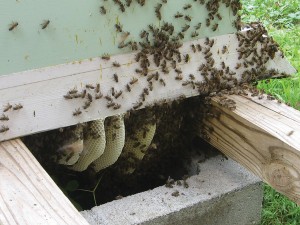 Bees will do the darndest things

In both cases, the hives in question were outfitted with a screened bottom board. The screened bottom board was first utilized widely by researchers who wanted to test various treatments for Varroa mites. It is tricky business trying to develop a pesticide that will kill a mite living on a bee, without also killing the bee. The researchers reasoned that by replacing the solid wooden bottom board with a screened bottom board, mites that die and fall to the bottom of the hive as a result of the treatment will fall through the screen. Researchers could then collect the dead mites, count them and determine the efficacy of the treatments they were testing. When conducting such trials properly of course, control hives have to be outfitted with screened bottom boards as well, but the controls are not given the mite treatments. It was during such trials that researchers observing control hives during trials discovered that a significant percentage of mites in a hive simply lose their grip and fall to the bottom of the hive during the course of the year whether the hive is treated for Varroa or not. As a result, many beekeepers now use screened bottom boards on their hives. It is the least labor intensive, and low cost method of removing a relatively small percentage of mites from a hive (approx. 20%) year-round without adding to the colony the additional stress that can be caused by the chemical contamination most Varroa treatments leave behind. While a screened bottom board is not enough on its own to keep bees infested with Varroa alive for very long, it can be part of a successful mite mitigation approach (see Bee Culture June 2015, Bermuda Bees or Bust).

Screened bottoms that are left open to the ground also eliminate the need to clean out the bits of pollen, beeswax and propolis, which along with the occasional mite and other hive debris can build up over time underneath the screen. When this happens it can attract scavengers such as wax moths and small hive beetles unless it is cleaned out regularly by the beekeeper.

In the case of the two hives observed this past season, they both were outfitted with screened bottom boards that were open to the ground, and they both were elevated above the ground high enough to provide room for the bees to build and maintain comb underneath the screen. Another commonality was that both hives were strong, healthy hives that were allowed to experience very overcrowded conditions. 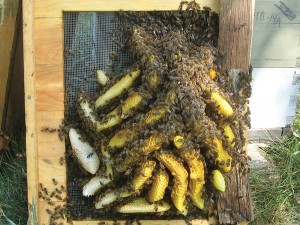 Beautiful comb . . . just not very easy for the beekeeper to work with.

In the first case the hive belonged to the widow of a beekeeper who recently passed into spirit and despite her best intentions, the hive was not being checked on a very regular basis. In the second case, I split a hive into a five-frame nucleus colony and inadvertently transferred the old queen into the nuc. When I checked the nucleus colony 30 days later, it had completely filled up the three additional frames of drawn comb and two frames of foundation that I had used to fill out the rest of the space in the 10-frame hive body that housed the five-frame nuc, and the colony had built burr comb all over the underside of the inner cover and filled the burr comb with honey. To make matters worse, I had run out of supers of drawn comb so I had to place a super of foundation on top of this overcrowded hive. This occurred right around the time the rains stopped coming regularly in Vermont’s Champlain Valley, causing the honey flow to slow to a trickle. As a result, the colony never drew out the foundation, and so even though the hive had room to expand, the foundation was not “usable” space for storing honey, pollen or raising brood, and this exasperated the overcrowded conditions.

The first question that came to mind when I discovered each of these hives was: is this a swarm with a second queen or an extension of the colony above? And if it is an extension of the hive above, do the combs below the bottom board contain brood? A close inspection revealed that in both cases, the combs were filled with honey and bee bread, with only the occasional single developing cell of drone brood. These isolated brood cells were apparently laid by a worker bee who’s ovaries became active due to lack of exposure to the queen and brood pheromones above the screen. This indicated that in both cases, the combs below the bottom board were an extension of the colony above. It was a relief to find no significant amounts of brood below the screens which meant that the queens were staying put inside their respective hives where they belonged.

Here in the northeast U.S., bees that are not enclosed within a protective cavity and are exposed to the biting wind, blowing snow, sleet, rain, hail and whatever else winter decides to dish up, do not stand a chance of surviving. Thus, I had to remove the comb under the bottom board and get the bees back into the hive above. I first tried replacing the bottom board, and moving the original bottom board, complete with comb, bees, honey and pollen some distance away from the hive. I figured the bees would find their way back to the hive, and rob out the honey in the combs left on the original bottom board bringing it back to the hive with them. Unfortunately, it was not as simple as that, for when the bees returned to the hive, they chose to go underneath the new bottom board that had been installed and started building comb under there again. 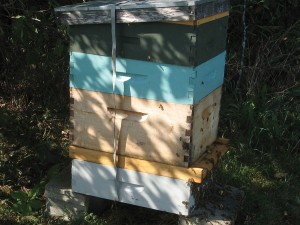 Well I figured, why fight them? If the bees want to be under the bottom board, I would try to work with their natural tendency rather than against it. This time I placed an empty shallow super of drawn comb under the replacement bottom board so that the bees had someplace to go when they returned to their favorite spot underneath the hive. In late Fall when the cool weather returns, I plan on removing the shallow super from under the bottom board. If the super is full of honey I can either harvest it or use it as Winter feed for the hive, and if it has significant amount of honey and pollen stored in the combs but also has significant amounts of empty comb, I plan on placing it above the screened bottom board but leave it on the bottom of the hive. This way the rest of the hive will have easy access to the honey and pollen in the combs and can move the food around the hive as needed when temperatures are favorable to do so. I never like to leave empty combs above the brood nest in fear that the cluster will eat their way into a corner where there is no honey and starve, unable due to the cold to reach the honey stored in other parts of the hive.

Before the advent of the screened bottom board, the scenario as described above would never have occurred. However, as is the case whenever a new technology or method is introduced, unexpected consequences can result – just another educational experience in my ongoing adventures with the bees.