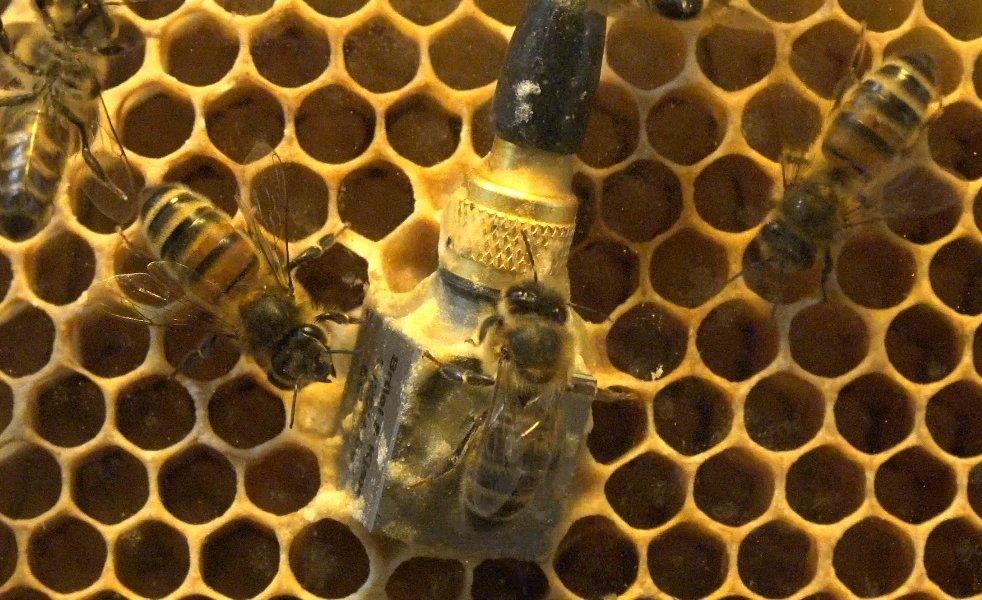 Vibrations In A Colony Tell A Story

WASHINGTON, D.C., November 5 – Before eating your next meal, pause for a moment to thank the humble honeybee. Farmers of almonds, broccoli, cantaloupe and many other nuts, vegetables and fruits rely heavily on managed honeybees to pollinate their crops each year.

Recently honeybees have been under stress from a mysterious threat called colony collapse disorder, which causes the majority of worker bees to abandon the hive. While scientists are still investigating the causes of the phenomenon, beekeepers could benefit from technologies that help them keep tabs on the health of their hives.

Researchers from Nottingham Trent University, in the United Kingdom, have now developed and tested a new prototype device that can remotely monitor hive activity without disturbing the bees. The device picks up and analyzes vibrations from special types of bee vocalizations, such as the common one called a “begging signal.” It has successfully tracked changes in bee activity from day to night, and seasonally, by monitoring the occurrences of this specific signal.

The team will present their results at the 170th meeting of the Acoustical Society of America (ASA), held Nov. 2-6, in Jacksonville, Fla.

“We want to develop a tool to find out the status of honeybee colonies — if the colony is starving, if there is a lot of foraging going on, or if the bees are preparing to swarm,” said Martin Bencsik, a researcher in the School of Science & Technology at Nottingham Trent University.

Swarming occurs when the queen bee and a large cohort of worker bees leave the hive in search of a new home. Most beekeepers don’t want their bees deserting en masse, and try to prevent or manage swarming, for example by removing the queen cells that house the eggs of future queens, and by giving additional empty space to the colony.

It takes a trained eye to detect the signals of an impending swarm, and opening up a hive to check the status often disturbs the bees. Bencsik and his colleagues inserted accelerometers into hives to test if they could remotely pick up vibration signals — which might indicate swarming or other types of activities.

The scientists embedded two ultra-high performance accelerometers in hives: one in the center of the honeycomb and another 7 centimeters lower. They continually recorded vibrations in a UK colony for 117 straight days, from July to November of 2014, and in a French colony for 170 days, from April to October 2015.

“The bees used the honeycomb cells right next to the accelerometers normally, for pollen, brood or honey, so they don’t seem to mind them,” Bencsik said.

To analyze the data the team wrote software to specifically detect “begging signals,” a type of faint, tooting sound bees commonly use. Scientists originally believed that bees used the signal to ask for food — hence the name — but more recent evidence suggests the signal might be telling other bees to stop what they are doing. The actual function of the “begging signal” is presently controversial.

Bencsik and his colleagues detected daily rhythms in the frequency of begging signals and also saw a clear decrease in signals as the colony entered the colder months. The researchers are also presently looking into the French data, collected from April through the summer, which includes swarming events, and may be able to present it at the ASA conference.

Bencsik said that, in the long term, the monitoring device might help governments track honeybee epidemics on a large scale and could also let amateur beekeepers “comfort themselves that their bees are okay and substantially reduce the need to visit them too often.”

Bencsik’s own father has been keeping bees for fifty years and the interest passed down from father to son. Although Bencsik spent much of his professional career researching magnetic resonance imaging, or MRI, he started looking into ways to monitor bees about eight years ago. “I love bees,” Bencsik said, “so ultimately I ended up researching them.”

Presentation 4pSP5, “Automated detection of honeybee begging signals from long-term vibration monitoring of honeybee hives,” will be presented by Bencsik’s student Michael-Thomas Ramsey at 2:30 p.m. on Thursday, Nov. 5 in the City Terrace 7 room. The abstract can be found by searching for the presentation number here: https://asa2015fall.abstractcentral.com/planner.jsp

Live Bee Removal Service and satisfaction guaranteed.
We are local in the cities of Redlands, Loma Linda and San Bernardino same day service