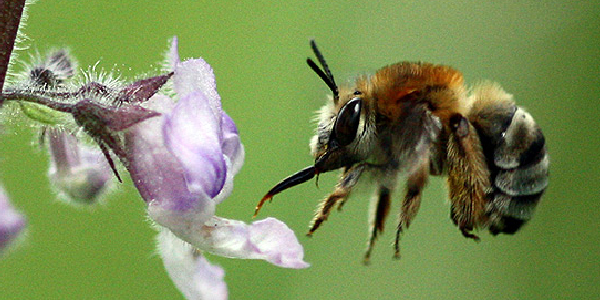 Among all the pollinators, honeybees get the most publicity, deservedly, because of the problems around their survival. Claire Kremen’s research at the University of California, Berkeley, looks at diverse pollinators — not just bees, but also birds, moths and many insects — and the issues affecting them as emblematic of the broader problems of the food system. Pollinators are critical to global food production and about 75 percent of crop species depend on them to produce food that is more abundant and nutritious than it would otherwise be.

Monoculture — a single crop in an open field that may measure many hundreds of acres — increasingly depends on importing thousands of hives (by truck, usually) for the pollination of crops, especially in places like California. For example, the state produces 80 percent of the world’s almonds, which has concentrated the need for bees way beyond the capacity of native pollinators.

Focusing on a single crop reduces the biodiversity pollinators need to survive, and the timetable they best work on. It’s also a risky endeavor to rely on one species, especially when there are diseases, management problems and the inherent risks of transportation. Yet the large single-crop farms require the large apiaries to get the job done.

Kremen, who looks specifically at how to better support native pollinators in a monoculture landscape, sees an opportunity to change conditions on a farm to restore pollinators and ideally reduce the impact of pesticides also. But none of this can happen without rediversifying the landscape.

In the region from Davis to Capay Valley, Kremen and her colleagues work with farmers to install native plant hedgerows with a sequence of shrubs, flowering plants and grasses that bloom across a long period of time, providing a rich source of food to support diverse pollinators. Evidence shows that hedgerows and a varied landscape help restore pollinator diversity and reduce the need to import masses of vulnerable honeybees.

Diversifying the landscape would help reduce farmers’ dependence on honeybees and the many other problems of monoculture farming.