Forager Bees ‘Turn On’ Gene Expression to Protect Themselves from Microrganisms, Toxins

DAVIS–When honey bees shift from nurse bees to foragers, or from caring for the brood to foraging for nectar and pollen, the bees “turn on” gene expression with products that protect against  microorganisms and degrade toxins, three scientists at the University of California, Davis scientists have discovered.

The paper on bee immunity and toxin metabolism was published Nov. 9 in Scientific Reports, part of the Nature Publishing Group.

“First, the results suggest that forager bees may use antimicrobial peptides—short sequences of amino acids with general activity– to reduce microbial growth in stored food resources,” said Rachel Vannette of the UC Davis Department of Entomology and Nematology. “This would be a largely unrecognized way that bees protect honey and potentially other stored resources from microbial spoilage. Second, this work shows that forager bees produce toxin-degrading enzymes in nectar-processing tissues.”

“This may allow forager bees to degrade many different kinds of compounds in nectar, before it is stored,” Vannette said. “Bees also vary in their ability to do this—foragers have a greater ability to degrade a variety of compounds than nurses. This may have implications for hive health and management.”

The scientists found the change in nectar-processing tissues, but not in the gut.   The scientists surmised that the exposure to bacteria or yeasts in the environment may trigger this change, but they did not examine it in the study.

“Nice paper,” said Gene Robinson, director of the Institute for Genomic Biology and Swanlund Chair of Entomology, University of Illinois at Urbana-Champaign, who was not involved in the research. “It had been well known that the division of labor in a honey bee colony is supported by extensive differences in brain gene expression between bees that perform different jobs. This new research shows nicely that this genomic differentiation extends beyond the brain; different complements of active genes in a variety of tissues make each bee better suited for the job it needs to perform.”

The journal article, titled “Forager Bees (Apis mellifera) Highly Express Immune and Detoxification Genes in Tissues Associated with Nectar Processing,” is the work of senior author/assistant professor Brian Johnson of the UC Davis Department of Entomology and Nematology, and co-authors Abbas Mohamed, graduate student researcher in the Johnson lab and a member of the Pharmacology and Toxicology Group, and assistant professor Vannette, who joined the UC Davis Department of Entomology this fall after serving a postdoctoral fellowship at Stanford University. At Stanford, Vannette examined the role of nectar chemistry in community assembly of yeasts and plant-pollinator interactions.

Mohamed, who has researched honey bees since 2011, is currently focusing on pesticide detoxification as a part of his master’s degree research. “Honey bees have always fascinated me,” Mohamed said, “and there is nothing more exciting than to be at the edge of discovery, learning new things, and contributing to the field of our understanding of these amazing creatures.”

The team plans to follow up with functional assays to examine the potential of these gene products to (1) reduce microbial growth and (2) degrade a variety of natural and synthetic compounds. 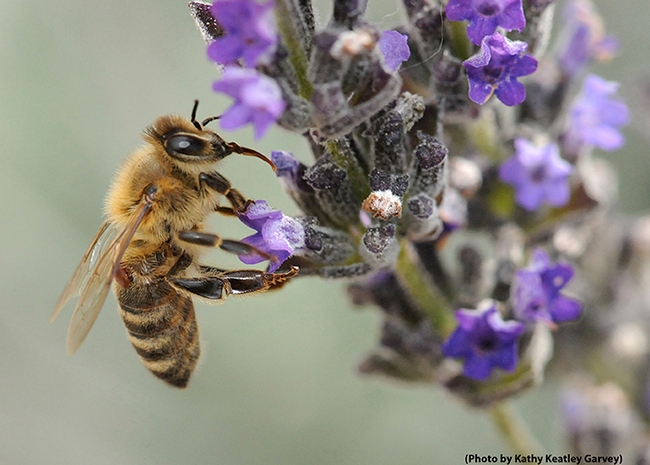 A Varroa mile clings to a forager (worker bee) as the bee nectars on lavender. (Photos by Kathy Keatley Garvey)

“Pollinators, including honey bees, routinely encounter potentially harmful microorganisms and phytochemicals during foraging. However, the mechanisms by which honey bees manage these potential threats are poorly understood. In this study, we examine the expression of antimicrobial, immune and detoxification genes in Apis mellifera and compare between forager and nurse bees using tissue-specific RNA-seq and qPCR. Our analysis revealed extensive tissue-specific expression of antimicrobial, immune signaling, and detoxification genes. Variation in gene expression between worker stages was pronounced in the mandibular and hypopharyngeal gland (HPG), where foragers were enriched in transcripts that encode antimicrobial peptides (AMPs) and immune response. Additionally, forager HPGs and mandibular glands were enriched in transcripts encoding detoxification enzymes, including some associated with xenobiotic metabolism. Using qPCR on an independent dataset, we verified differential expression of three AMP and three P450 genes between foragers and nurses. High expression of AMP genes in nectar-processing tissues suggests that these peptides may contribute to antimicrobial properties of honey or to honey bee defense against environmentally-acquired microorganisms. Together, these results suggest that worker role and tissue-specific expression of AMPs, and immune and detoxification enzymes may contribute to defense against microorganisms and xenobiotic compounds acquired while foraging.”