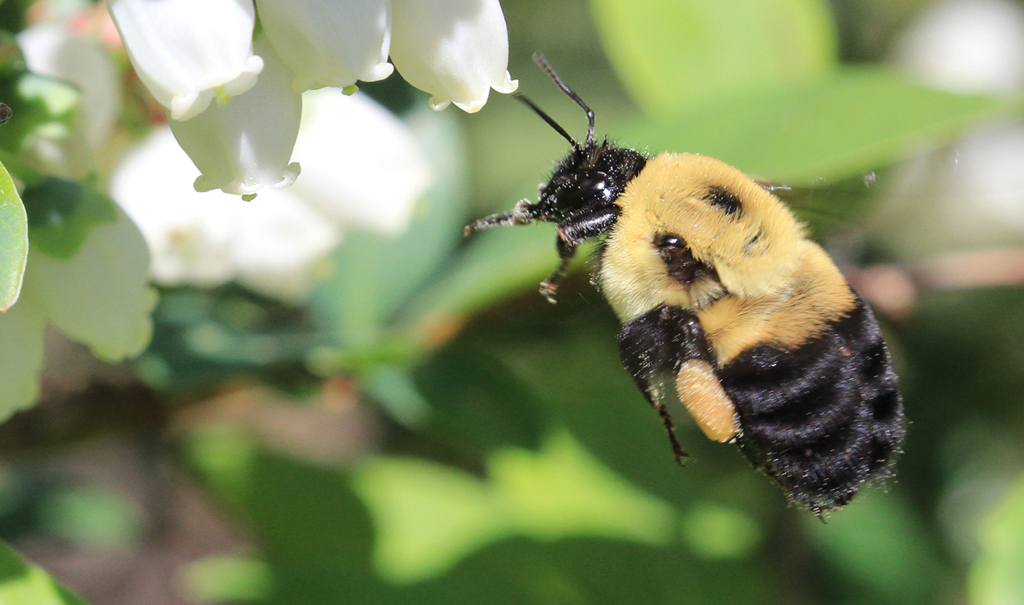 The first national study to map U.S. wild bees suggests they’re disappearing in many of the country’s most-important farmlands.  If losses of these crucial pollinators continue, the new nationwide assessment indicates that farmers will face increasing costs – and that the problem may even destabilize the nation’s crop production, said Michigan State University’s Rufus Isaacs, co-author and leader of the Integrated Crop Pollination Project, a USDA-funded effort that supported the new research. The findings were published in the current issue of the Proceedings of the National Academy of Sciences.

The research team, led by Insu Koh at the University of Vermont, estimates that wild bee abundance between 2008 and 2013 declined in 23 percent of the contiguous U.S. The study also shows that 39 percent of U.S. croplands that depend on pollinators – from apple orchards to pumpkin patches – face a threatening mismatch between rising demand for pollination and a falling supply of wild bees.

In June of 2014, the White House issued a presidential memorandum warning that “over the past few decades, there has been a significant loss of pollinators, including honey bees, native bees, birds, bats and butterflies.” The memo noted the multibillion dollar contribution of pollinators to the U.S. economy – and called for a national assessment of wild pollinators and their habitats.

Researchers didn’t have a national mapped picture about the status of wild bees and their impacts on pollination – even though each year more than $3 billion of the U.S. agricultural economy depends on the pollination services of native pollinators like wild bees, Koh said.

The new study identifies 139 counties in key agricultural regions of California, the Pacific

Northwest, the upper Midwest and Great Plains, west Texas and the southern Mississippi River valley that have the most worrisome mismatch between falling wild bee supply and rising crop pollination demand. These counties tend to be places that grow specialty crops – such as almonds, blueberries and apples – that are highly dependent on pollinators. Or they are counties that grow less dependent crops – such as soybeans, canola and cotton – in large quantities.

Of particular concern, the study shows that some of the crops most dependent on pollinators – including pumpkins, watermelons, pears, peaches, plums, apples and blueberries – have the strongest pollination mismatch, with a simultaneous drop in wild bee supply and increase in pollination demand.

“By highlighting regions with loss of habitat for wild bees, government agencies and private organizations can focus their efforts at the national, regional and state scales to support these important pollinators for more sustainable agricultural and natural landscapes,” Isaacs said.

The model’s confidence is greatest in agricultural areas with declining bees, matching both the consensus of experts’ opinions and available field data. However, the study also outlines several regions with greater uncertainty about bee populations. This knowledge can direct future research, especially in farming areas where need for pollination is high