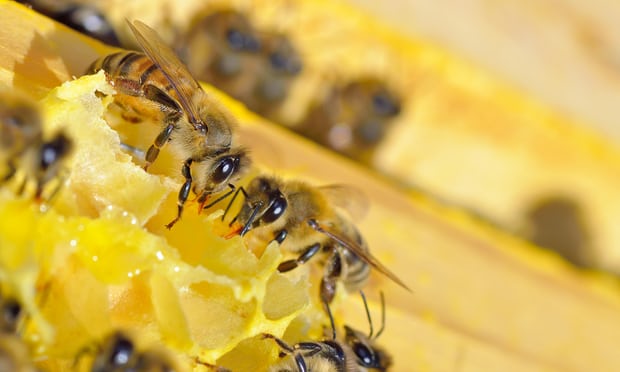 Almost a quarter of British honey samples remain contaminated after a partial ban on neonicotinoid pesticides, new research has revealed.

The contamination rate has fallen – it was more than half before the ban – but the study shows that the potent insecticides remain prevalent in the farmed environment and still pose a serious risk to bees and other vital pollinators.

Neonicotinoids are the world’s most widely used insecticides but growing evidence of serious harm to bees led the EU to ban their use on flowering crops such as oilseed rape, starting in spring 2014. The new findings will add to pressure on the EU to ban all outdoor uses of the pesticides, with a vote expected in coming months. Neonicotinoids at the levels found in the honey are not known to pose any risk to human health.

Honey is seen as a good sample of the local environment and work published in October revealed global contamination by neonicotinoids, with 75% of samples from around the world containing the chemicals. The new research, based on scores of samples from across Britain, goes further by comparing contamination rates before and after the EU ban.

“While the frequency of neonicotinoid contaminated samples fell once the EU-ban was in place, our data suggest that these pesticides remain prevalent in the farming environment,” said Ben Woodcock, at the UK’s Centre for Ecology and Hydrology (CEH). He also led a landmark field trial, published in 2017, that showed neonicotinoids damage the survival of honeybee colonies and harm wild bees.

Neonicotinoids are mainly used as seed treatments, which allows the pesticide to be taken up throughout the plant, including the nectar and pollen that bees collect. But only 2-20% of the chemical is taken up, with the rest remaining in the soil where it can take years to degrade.

“[Our] results suggest mass flowering crops [such as oilseed rape] may contain neonicotinoid residues where they have been grown on soils contaminated by previously seed-treated crops,” the researchers said in their paper, published in the journal PLOS One.

The researchers found a positive correlation between the pesticide residues in honey and the area of oilseed rape grown near the hive.

Currently, neonicotinoids can still be used on some crops, such as wheat. Previous research shows contaminated soils can also lead to wildflowers containing neonicotinoids.

The honey samples analysed in the new study were donated by amateur beekeepers and came from single locations. “The results of this national survey suggest that the EU moratorium on neonicotinoid use for mass-flowering crops has been only partially effective in reducing exposure risk to bees,” the scientists said.

To investigate the issue further, CEH is developing a national scheme to monitor pesticide residues in honey samples sent in by amateur and professional beekeepers.