How to Prevent Bee Extinction 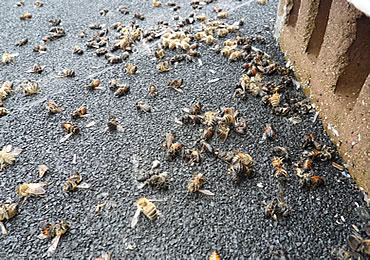 Here at USA Live Bee Removal try to prevent bee extinction by safely removing them to a safer location. Call us 951-476-8495

Where Have Bees Gone?

Honey bees are disappearing at an alarming rate. Last year was the worst case in recorded history for beekeepers who lost 44% of their colonies. What is even more alarming is some winter losses are normal but now we are losing colonies in summer which has never happened before and is cause for serious concern. Honeybees are dying off from a number of reasons which are classified under (CCD) Colony Collapse Disorder. Some of the factors contributing to this are stress from moving and transporting hives, malnutrition, loss of habitat, disease, nosema, foulbrood, wax moth, climate change, herbicides, chemicals and pesticides and one that scientists are constantly trying to find a way to defeat is varroa destructor also know as the varroa mite which will hitch a ride on a bee into the hive,then lay eggs which will feed on the young bees and ultimately will wipe out the entire hive. In human terms picture a mite the size of a pancake which attaches itself to you and sucks the blood from you. I have come across many different points of view about losing our honeybees, one of which is honeybees are not native to the U.S. That is true, they were brought over by the Europeans, an incredible feat to think of how many died in the process but some made it and survived. We then adapted to life here and adapted along with the honeybees which now contribute$14 billion to the value of U.S. crops. The other fact that has come up many times is if the honeybees die we can use mason bees and other native bees as pollinators. If we had a much smaller population that would be possible but there is simply no way they can somehow pollinate on a commercial scale to feed a 9 billion population as honeybees do. Take a second to think of what honeybees pollinate, fruits, vegetables, the herbs we use to season our foods, nuts, berries, cotton for clothing, clover and alfalfa which is the main feed for the cattle industry from which we get yogurt, milk, cheese, butter, ice cream, dairy and beef. Also coffee beans depend on pollination for increased yields, think of star bucks and your morning coffee. There are flowers for our holidays, beeswax which is used in the cosmetic industry, and lets not forget honey! We are all at a critical point and cannot afford to let our honeybees disappear. We must all do our part to help save and protect them along with ALL of our pollinators ensuring our own survival and ultimately our children’s on this beautiful planet.

• Plant a pollinator garden that is pesticide-free

• Simply leave dandelions alone as they are an important early source of pollen to emerging pollinators. Do not use weed killer because trace amounts of pesticides can be brought back to the hive.

• Keep a fresh water source for the pollinators. It can be as simple as a shallow bird bath with rocks in it.