Prevent a large impact by the rising death of honeybees 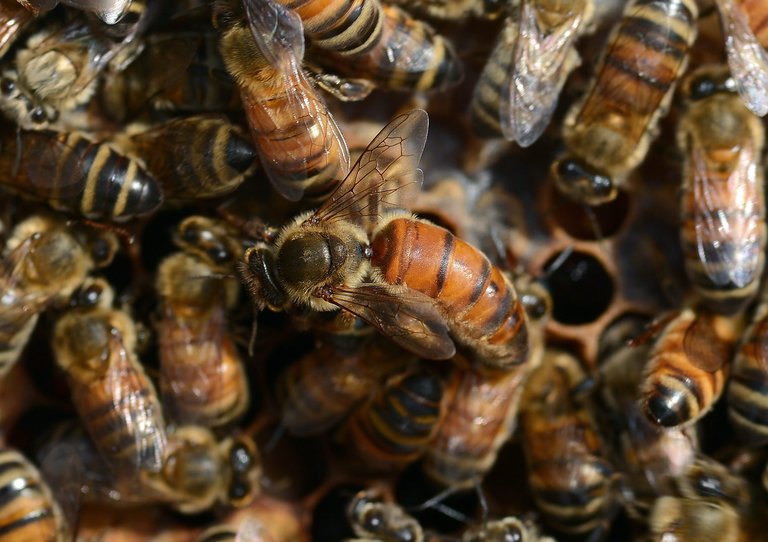 Here in Rancho Cucamonga USA Live Bee Removal have the skills to Prevent a large impact by the rising death of honeybees. Please Call us 951-476-8495

The Secret Ingredient That Stops Honeybees From Becoming Queens

“You are what you eat” is a common adage among humans, but a new study explains why it might be more apt for honeybees. In a paper published Thursday in PLOS Genetics, researchers found specific molecules in the pollen and honey mixture that honeybee larvae feed on cause physical changes that determine whether females develop into long-living, reproductive queens or the mostly sterile workers that nourish larvae and collect food. Researchers have long known that these differences are not determined at birth, but rather are a product of diet. Larvae that eat royal jelly, a substance secreted by the glands of nurse bees, develop into queens, while those that feed on a combination of pollen and honey called bee bread become workers.

Previous research focused on the role of the protein and sugar-rich royal jelly in caste development, but this study found a new mechanism: small molecules in plants called microRNA. These molecules can affect the size and colorfulness of plants, and also play a crucial role in bee development. Transferred to a bee through bee bread, the microRNA can affect genes in ways that delay physical development and keep the bees sterile. “Neither substance is sufficient alone,” said Dr. Chen-Yu Zhang, co-author of the study and a professor of biochemistry at Nanjing University in China. “The royal jelly and plant microRNA work together to affect caste formation.”

Researchers raised honeybees in the lab to study the effects of the plant microRNA in bee bread. They found that larvae raised on diets supplemented with the plant material had smaller bodies and smaller ovaries than those raised without the supplement. Further experiments showed that one of the most common types of plant microRNA found in bee bread targets a gene in honeybees, TOR, which helps determine caste.

“They did a nice job documenting the specific role of microRNA that has a very profound impact on this development,” said Xiangdong Fu, a professor of cellular and molecular medicine at UC San Diego who was not involved with the study. “It’s fascinating. Depending on what you eat, you can end up a different way.” This information could provide new insight into the mysterious trend of rising honeybee deaths in the last decade, which could have a large impact on agriculture. Xi Chen, a co-author of the paper and a professor of biochemistry at Nanjing University, said plant microRNA could play a role. “We could check if changing microRNA in certain plants can cause the disappearance of the honeybee,” he said.

The study also points to the interdependence of plants and honeybees. The plant substance that affects bee development is also important for the formation of certain flowers, Dr. Zhang said. The molecules can make a flower larger and more colorful, which attracts more bees and helps spread its seed, a sign of plant and insect co-evolution. This is a large, emerging area of research, according to Dr. Philip Askenase, a professor of medicine and pathology at Yale University School of Medicine, who was not involved in the study. “Here you have evolutionary dependence of the creature and the plants,” he said. MicroRNA from plants can influence bee development and microRNA from bees can influence the pollen they spread, affecting the next generation of plants. “They are mutually contributing microRNA to each other. That’s a big deal.”

Learning more about how these molecules can affect species in different kingdoms — like plants and insects or plants and humans — could help identify therapeutic applications for cancer treatments or to suppress allergic reactions, Dr. Askenase said. “Some important biological problems could now be addressed with this new knowledge of how nature works,” he said.