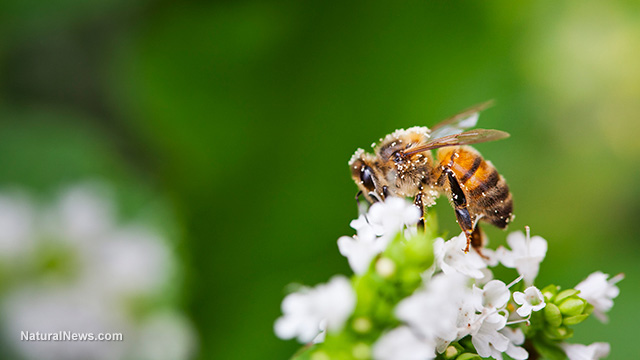 (NaturalNews) For the first time ever, bees have made their way onto the endangered species list. Following several years of analysis, the United States Fish and Wildlife Service (FWS) has placed not one, but seven species of Hawaiian yellow-faced bees on the list.

In a joint effort with an invertebrate species advocacy organization known as the Xerces Society and Hawaiian state officials, the FWS studied the status of the bees. Just 10 years ago, in 1996, the FWS placed 33 different bee species on their “species of concern” watch list.

These bees are all native to Hawaii, and their populations have been suffering for years, thanks to the invasion of non-native plants and animals. The destruction of their habitat to make way for skyscrapers and other forms of urbanization has also been problematic for bees, as it has for other creatures. Bees, however, are particularly valuable to humans, because we rely on them to pollinate our plants and gardens.

According to conservation and restoration team manager, Gregory Koob, of the Fish and Wildlife Service in Honolulu, these bees are an essential part of the Hawaiian ecosystem due to their role as pollinators, and they are “critical for maintaining the health of plants and other animals across the islands.”

Because these Hawaiian bees have been placed on the endangered species list, they will now (hopefully) receive special protection from the federal government. The Verge reports that these measures are “designed to help boost the species population and protect them from harassment from humans.”

These extra protections are vitally important; bee populations have been on the decline nationwide. For example, it has been reported that the FWS may also be adding the rusty-patched bumble bee to the endangered list, and it’s a species that is found across the U.S. One thing is clear: Bee populations are dwindling, and that is dangerous for all of us.

There are many things that are contributing to the steadily declining numbers of bees in the United States. Just last year, in July of 2015, a study published in the Journal of Experimental Biology found that glyphosate may indeed be playing a role in colony collapse. The study found that exposure to the toxic herbicide destroyed the honeybees’ ability to locate and return back to their hives. Bees exposed to glyphosate also experienced a decreased capacity to learn, reduced foraging skills and reduced appetite. Their memories and sense of smell were also impaired. It was discovered that bees would inadvertently bring glyphosate back into the hive (if they made it there) thereby also exposing non-foraging bees to the toxin.

The researchers from the University of Buenos Aires in Argentina, stated, “These results suggest that, in honeybees, exposure to [glyphosate] doses commonly found in agricultural settings impairs the cognitive capacities needed to retrieve and integrate spatial information for a successful return to the hive.”

Colony Collapse Disorder, or CCD, was a phenomenon first discovered in 2006. Since then, it has become increasingly concerning. In 2015, CBS News reported that beekeepers lost more than 40 percent of their beehives in just a single year.

This trend has just continued to get worse as the years have gone by. In addition to glyphosate, neonicotinoid pesticides have also been a contributing factor in the mass bee die-off that is plaguing beekeepers across the states.

To put it bluntly, humans are causing the rapid decline of bee populations, and our best bet is to take immediate action to save all of the bees, not just the species that are already endangered.