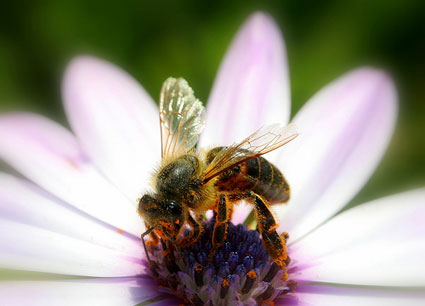 Honeybees usually get about eight hours of sleep a night (lucky things!), but what happens when evil researchers keep them up all night?

The first study of sleep in bees, published this week in the Proceedings of the National Academy of Sciences, found that the tired bees lag just like sleep-deprived humans do. Too bad bees don’t have coffee. Says lead researcher Barrett Klein:

“When deprived of sleep, humans typically experience a diminished ability to perform a variety of tasks, including communicating as clearly or as precisely. We found that sleep-deprived honey bees also experienced communication problems. They advertised the direction to a food site less precisely to their fellow bees.”

So how do you keep bees awake when they don’t need to cram for a calculus final? You make them magnetic. Klein attached a piece of either steel or non-magnetic metal to the bees’ backs. Then all through the night, the researchers swung a magnet over the hive three times a minute–a device they call the “insominator.” This jostled the bees with the magnetic steel on their backs and kept them from sleeping.

When the team watched videos of the bees filmed the following day, they found that the sleep-deprived bees performed less precise waggle dances. The tired insects had more variation in the angle of their dances, and as a result gave other bees poor directions to a food source.

A honeybee’s waggle dance is an important part of its communication–the dance moves tell the other bees where it has found nectar-rich flowers. In nature (where the bees aren’t plagued by researchers waving insominators around), the bees could become sleep-deprived by the presence of predators, the movement of hives by beekeepers, or by parasites in the hive. Klein says this could be a factor in the alarming decline of bees over the past five years: