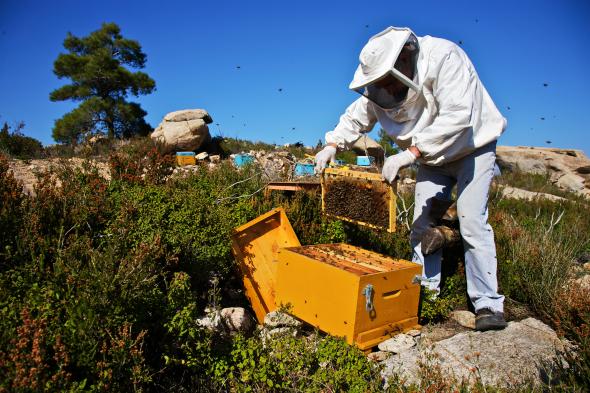 We are a company about Saving Bees in USA Live Bee Removal, We are fast and provide the best customer service. Call us 951-476-8495

The Plight of the Honeybee

For the last several years scientists have fretted over the future of bees, and although research has shed much light on the crisis, those in the bee business—from hive keepers to commercial farmers—say the insects remain in deep trouble as their colonies continue to struggle.

The current crisis arose during the fall of 2006 as beekeepers around the country reported massive losses—more than a third of hives on average and up to 90 percent in some cases. Bees were flying away and simply not coming back; keepers would find boxes empty of adult bees except for a live queen. No bee corpses remained to tell the tale. The losses were unprecedented and fast.

Now it’s five years later, and though colony collapse disorder (CCD)—the name given to the mysterious killer condition—has dwindled in the manner of cyclical diseases, bees are still battling for their lives and their colonies are weaker than ever. The latest data, from the 2012-2013 winter, indicate an average loss of 45.1 percent of hives across all U.S. beekeepers, up 78.2 percent from the previous winter, and a total loss of 31.1 percent of commercial hives, on par with the last six years. (Most keepers now consider a 15 percent loss “acceptable.”)

Why keep worrying over the fate of a bunch of pesky stinging insects? Bees in their crucial role as pollinators are paramount. Western nations rely heavily on managed honeybees—the “moveable force” of bees that ride in trucks from farm to farm—to keep commercial agriculture productive. About a third of our foods (some 100 key crops) rely on these insects, including apples, nuts, all the favorite summer fruits (like blueberries and strawberries), alfalfa (which cows eat), and guar bean (used in all kinds of products). In total, bees contribute more than $15 billion to U.S. crop production, hardly small potatoes.

No, we wouldn’t starve without their services—much of the world lives without managed pollinators. But we’d lose an awful lot of good, healthy food, from cherries and broccoli to onions and almonds. Or we’d pay exorbitant costs for farmers to use some other, less efficient pollination technique to supplement the work that healthy natural pollinators could do. Plus, bee health can tell us a lot about environmental health, and thus about our own well-being.

Today’s pollinator crisis, which has also hit Europe and now parts of Asia, is unprecedented. But honeybees have done disappearing acts on and off for more than a century, possibly since humans began domesticating them 4,500 years ago in Egypt. In the United States, unexplained colony declines in the 1880s, the 1920s, and the 1960s baffled farmers, and in 1995-1996 Pennsylvania keepers lost more than half of their colonies without a clear cause. The 1980s and 1990s saw various new parasites that hit bees hard; Varroa and tracheal mites became major killers, and they continue to plague hives and keep beekeepers up at night.

When CCD appeared, the USDA’s Agricultural Research Service and the National Institute of Food and Agriculture joined forces to study and fight the assailant, but a half-dozen years later they still lack a smoking gun. Recent work reveals higher loads of pathogens in the guts of bees from collapsed colonies versus healthy ones—making viral infections a likely culprit.

But this isn’t a case of one cause, one effect. Bee expert Dennis vanEngelsdorp of the University of Maryland likens the situation to HIV/AIDS in humans. “You don’t die of AIDS; you die of pneumonia or some other condition that hits when your immunity is down,” he says. Today’s bee mortalities may be behaving slightly differently. “But we’re pretty sure in all these cases, diseases are the tipping point” after bees’ immune systems are compromised.

So what makes bees vulnerable to those diseases, what’s killing their immunity, continues to be the $15-billion question.

Zac Browning is a fourth-generation beekeeper based in North Dakota. His mostly migratory commercial operation runs about 22,000 hives in three states—meaning he trucks his bees to different locations at different times of year, renting out their pollination services to big farms like those producing almonds in California and canola in Idaho.

CCD devastated his hives a few years back, but “we’ve seen losses more recently from everything imaginable,” he says. “Pests, parasites, pesticide exposure, starvation, queen failures, you name it.”

In addition to these problems piling up, “our inputs have gone up one-and-a-half times in the last decade,” he says. “We now have to try to sustain bees [with extra food] when natural food is scarce, dearth periods that didn’t exist before.”

Part of the problem is keepers have to boost hive numbers to meet demand, “but the carrying capacity of the environment hasn’t changed.” In fact, it’s gone down. The amount of undeveloped land with good bee forage just isn’t enough to sustain the masses, he says.

Meanwhile, studies have shown that colonies with access to the best pollens (with more than 25 percent protein plus essential amino acids), which occur in diverse plant habitats once common across the landscape, are more robust and more resistant to disease than those in pollen-poor environments.

The Threat From Pesticides

Another adversary in the bees’ battle, as the EU reminds us, is pesticides. Pesticides themselves aren’t necessarily a death sentence for bees—and debate rages over whether, when properly applied, these chemicals can be used safely among pollinators. But exposure to them seems to open the door to other killers.

For example, bees exposed to sublethal doses of neonicotinoids—the type the EU is banning and that are used routinely in the U.S. on wheat, corn, soy, and cotton crops—become more easily infected by the gut parasite Nosema.

Meanwhile, last year a French study indicated that this same class of chemicals can fog honeybee brains and alter behavior. And a British study on bumblebees, a natural pollinator in decline in many places, reported neonicotinoids keep bees from supplying their hives with enough food for queen production.