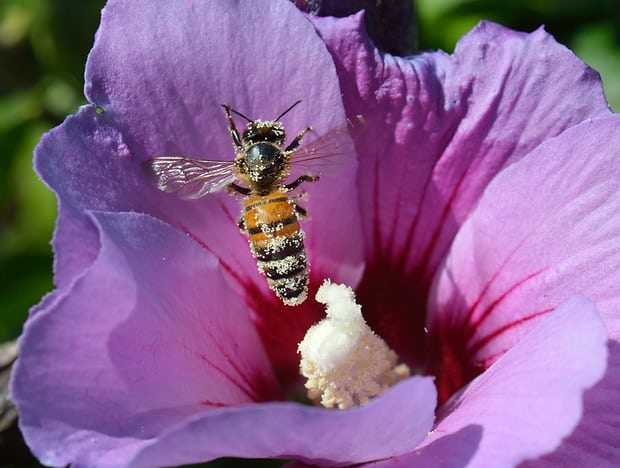 Why are bees important?

Bees pollinate a third of everything we eat and play a vital role in sustaining the planet’s ecosystems. Some 84% of the crops grown for human consumption – around 400 different types of plants – need bees and other insects to pollinate them to increase their yields and quality. These include most fruits and vegetables, many nuts, and plants such as rapeseed and sunflowers that are turned into oil, as well as cocoa beans, coffee and tea. Crops grown as fodder for dairy cows and other livestock are also pollinated by bees. And it’s not only food crops that rely on bee pollination, cotton does as well. As a result, annual global crop pollination by bees is estimated to be worth $170bn.

But beyond their monetary value for maintaining our fragile food supply, bees also make an invaluable contribution to ecosystems around the world. Seeds, fruits and berries eaten by birds and small mammals are all from plants that are pollinated by bees, making them guardians of the food chain and the biodiversity of our species.

Bees are industrious pollinators because they have co-evolved with flowering plants over millions of years. The bees need the flowers for food, while the flower needs the bee to reproduce. Unlike other insects, nectar and pollen from flowering plants are bees’ only food source; the sweet nectar drink gives adult bees energy. Pollen is protein-rich baby food. As the poet Kahlil Gibran beautifully put it: “To the bee, a flower is the fountain of life, and to the flower, the bee is a messenger of love.”

In the process of foraging for food, bees are designed to pollinate. If you watch a female honeybee or bumblebee on a flower, you will see she has balls of pollen on her back legs. These are collected in her pollen baskets which she takes back to the nest to feed the young after fertilising the flowers. For solitary bees, the pollen collects on the hairs on their abdomen.

So how do the bees pollinate? Quite simply, the bee gets covered in pollen, from the male part of the flower (the stamen), and deposit the grains on the female part (the stigma) of the next flower that they visit. Luckily for the plant, bees tend to visit flowers from the same plant when they are flowering rather than flit from one plant to another, so the plant is able to have sex. Once the pollen is on the stigma it moves down into the ovary where it fertilises and forms a seed. A few months later the seed grows into a fruit or vegetable. Think of an apple tree; it blossoms, is visited by bees, produces apples later in the summer containing pips (the seeds), which if planted could slowly grow into a new apple tree.

There is an apocalyptic quote attributed to Albert Einstein (although there is no proof he actually said it): “If the bee disappeared off the surface of the globe then man would only have four years left to live.” It resonates with people as a plausible consequence of the bee’s demise. While the timescale is wildly exaggerated and fails to take into account man’s ingenuity, it highlights how mankind’s survival has been inextricably linked to bees. Cave drawings dating back 20,000 years depict images of honey hunting. The ancient Egyptians transported their hives along the Nile to pollinate crops and buried their pharaohs with containers full of honey to sweeten the afterlife. The antibacterial and antiseptic properties of honey have made it as important to the apothecary as the chef over the centuries, while beeswax embalmed the dead and created artificial light. In the 15th century, the pilgrim fathers took their honeybees with them to spread their farming practices and colonise the new world. The native Americans called the honeybee the “white man’s fly”. The continent had wild bees, but no honeybees, as was the case in Australasia before western settlers arrived.

There are 25,000 different bee species around the world. Only four of these species are honeybees, of which the western honeybee (Apis mellifera) is the one we took to the US and then on to Australasia. Honeybees make honey. It’s their winter food, for feeding the 10,000-strong colony in the hive when it’s too cold to fly. Bumblebees don’t make honey we can harvest but they are important pollinators, too. Around 250 species of bees are different types of bumblebees. Their hairier coats can attract more pollen and they can fly at colder temperatures than honeybees. Some species are long-tongued so are better at pollinating plants with long, tubular flowers. And they are capable of “buzz pollination” – by shaking the pollen from the anthers of a flower on to the stigma of another – which is how some crops, notably tomatoes, are pollinated. While most bumblebees are wild, some species are increasingly used commercially to buzz pollinate. Research shows that under the same conditions, bumbles can actually pollinate more flowers per bee than honeybees, though a honeybee colony (50,000 bees in the summer) is much larger than a colony of bumblebees (only 250).

The vast majority of the world’s bee species are solitary bees. As their name suggests they live alone. Many are adapted to pollinate one type of plant and their life cycle is synced with the plant so they are able to pollinate it and feed their young at the same time. There’s been little research on solitary bees, but in March, the first ever assessment of all 1,965 bee species across Europe by the International Union for Conservation of Nature (IUCN) found that almost one in 10 of Europe’s wild bee species – most of which are solitary bees – face extinction as a result of intensive farming, insecticide use and climate change.

Most people have heard about colony collapse disorder, which wiped out a third of all honeybee colonies in the US when it first struck back in 2007. The disorder is still not fully understood, but a combination of parasites, viruses, poor nutrition and pesticides are thought to be behind the widespread death of honeybees in the US, where 40% of colonies are still dying each year.

In the UK, honeybee winter losses have ranged from 10% to 33% since annual surveys began eight years ago. When inclement weather confines bees to the hive during the spring and summer they become weak and easy prey for the parasitic varroa mite to spread viruses that kill off its host.

But in many ways, the uncertain future of wild bumblebees and solitary bees is even more alarming than the honeybee death toll, since beekeepers are able to restock their hives each year.

The habitat that wild bees depend on to nest and forage is increasingly disappearing due to modern farming practices and urbanisation. Since 1945, 97% of wildflower meadows in the UK have vanished. During that time two bumblebee species have become extinct, and of the 24 species left only eight are commonly found. Globally, a quarter of the world’s 250 bumblebee species are thought to be facing some degree of extinction risk, according to the IUCN.

John Muir, a giant of the conservation movement, summed up the importance of bees to the human race when he said: “When one tugs at a single thing in nature, he finds it attached to the rest of the world.” We harm them at our peril.