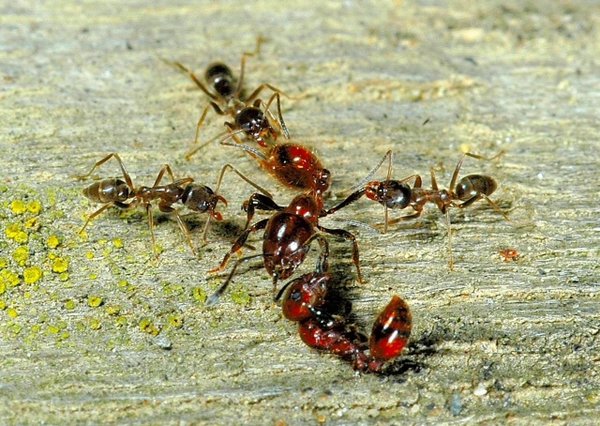 The Argentine ant, already known as one of the world’s most widespread and damaging pests, may be infecting honeybees with a deadly virus, a new study finds.

Alexandra Sebastien, a biologist at Victoria University of Wellington in New Zealand, analyzed Argentine ant populations in New Zealand, Australia and Argentina as part of her doctoral research.

She and her colleagues found that ants from all three locations can carry the deformed wing virus, a pathogen linked to colony collapse in honeybees. The new study appears in the current issue of the journal Biology Letters.

Argentine ants have flexible diets that allow them to thrive in many climates and on multiple continents. They eat other ants and insects, but also prey on larger animals like skinks and geckos.

“These ants, when they establish in an area, they become very widespread and they forage in the same places as bees,” said Phil Lester, a biologist at Victoria University of Wellington and a co-author of the new study.

The researchers also discovered that some Argentine ants carry a second virus that could be useful in controlling the ants. “It could save us from utilizing large amounts of pesticides,” Dr. Lester said.